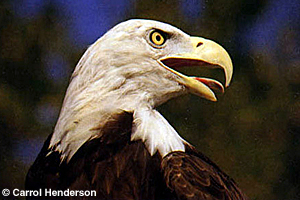 The Bald Eagle (Haliaeetus leucocephalus), our national symbol, has long been a valued component of Minnesota's wildlife. The state's first bald eagle survey (1973), conducted while the species was in the midst of a severe population decline due to the effects of environmental contaminants, found 115 active nests. Following the bald eagle's protection as a threatened species under the federal Endangered Species Act in 1978, a federal recovery team established a goal for Minnesota of 300 active breeding territories by 2000. This goal was reached in 1987. The Minnesota Department of Natural Resources (DNR) conducted statewide bald eagle surveys annually between 1973 and 1995. These surveys indicated that Minnesota's eagle population experienced a dramatic and ongoing recovery during that period.

In 1999, the U.S. Fish and Wildlife Service proposed to remove the bald eagle from protection under the federal Endangered Species Act. In preparation for this action, the DNR's Nongame Wildlife Program conducted a statewide bald eagle survey during the 2000 nesting season. The survey was designed to visit all known nests, provide a baseline for monitoring the state's bald eagle population in the future, and clarify current habitat needs of the species.

The DNR began the 2000 bald eagle survey by soliciting reports of eagle nests from natural resource professionals and the public. These reports were combined with previously known nest locations to identify the areas to be searched during the 2000 survey. Surveys were conducted from small aircraft by Minnesota DNR, U.S. Forest Service, U.S. Fish and Wildlife Service, National Park Service, and tribal biologists. In late March and April, observers flew over known nesting areas to determine whether or not eagles were present. Over 1,300 known breeding areas were surveyed to evaluate activity, and 681 occupied breeding areas were identified. A second flight was conducted in June to count the number of nestlings in active nests. In 2000, the DNR chose to reduce costs by assessing reproduction at a portion of occupied breeding areas, representing a range of ownerships and land uses. In all, surveyors obtained counts of young at 413 nests. The number of young per nest averaged 1.22 for all nests visited during the June flights, but this figure ranged widely for different areas of the state. For example, while 8 nests within the Minnesota portion of the Upper Mississippi National Wildlife & Fish Refuge produced an average of 0.87 young per nest, refuge-wide production from 84 active nests averaged 1.28 young per nest. The percent of active nests with any young was less variable, ranging from 69.9% to 100.0%, and averaging 76.5% statewide.

The 2000 Minnesota Bald Eagle Survey documents the continuing recovery of the species within the state, and provides a baseline for population monitoring into the next millennium. Because the survey was largely limited to known nests, the results describe the minimum number of nests within the state. There are undoubtedly additional nests that have never been reported to the DNR, especially in the more remote and less visited regions of the state, and for eagles using 'atypical' habitat. The DNR will continue to record reports of bald eagle nests in preparation for future surveys.

As expected, growth of the state's bald eagle population appears to be slowing, but remains at a healthy level. As illustrated above, a comparison of 1995 and 2000 survey results indicates that bald eagles are slowly expanding into the southern and western portions of the state, where prime bald eagle habitat (large areas of forest near open water) is scarce, but critical habitat components (large trees for nesting; open water for foraging) are available. At the same time, the number of nests and reproductive success of eagles appears to be dropping in the forested region that provided a refuge for eagles in the 1970s. Due to the extraordinary efforts of Chippewa National Forest biologists over the years, data for that prime bald eagle habitat area provide a particularly complete example of this.

The observed decline in nest numbers and reproductive success in the forested region's prime habitat may indicate that available habitat in that region has reached its capacity to support eagles. Those eagles remaining in this densely populated region may need to expend more energy competing with other eagles, leaving less time for feeding young, and resulting in lower reproductive success. This observed decline may also be due, in part, to recent landscape-scale blow-downs of large trees in the region. This loss of nest trees may have displaced many eagles to locations that have yet to be found or are supporting less successful nests.

In cooperation with the U.S. Fish and Wildlife Service and Dr. James Grier, an eagle expert at North Dakota State University, the DNR will be using the 2000 Minnesota Bald Eagle Survey results to characterize bald eagle habitat in Minnesota, and to study the relationship of human disturbance to the reproductive success of eagles. These studies will provide information critical to the sustainable management of the state's bald eagle population.

Minnesota's bald eagle population appears large, healthy, and expanding as the new millennium begins. All indications are that more and more Minnesotans will be enjoying the awesome experience of watching an eagle soaring gracefully overhead. However, this prediction relies on the continued vigilance of every citizen in respecting bald eagles, protecting eagle habitat, and avoiding excessive disturbance to eagle nests. Only with this attention can Minnesotans insure that their children and grandchildren will have the pleasure of sharing their world with this magnificent bird. 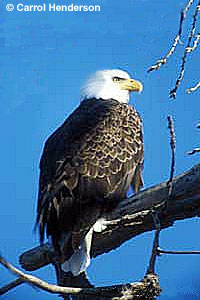 The 2000 Minnesota Bald Eagle Survey was funded by Minnesotans who purchase Conservation License Plates for their automobiles, contributions to the Nongame Checkoff on state tax forms, and a grant from the U.S. Fish and Wildlife Service.