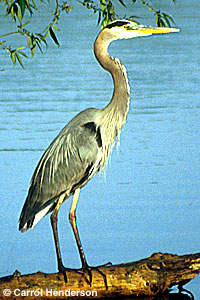 In marshes and along the lakes of Minnesota, 17 species of colonial waterbirds can be found, including most grebe species, pelicans, cormorants, herons, egrets, gulls and terns. Because colonial waterbirds nest in groups, disturbance in a colony has the potential to interfere with reproductive success of many individuals, sometimes thousands of nesting pairs. Their foraging habitats have been threatened by wetland drainage, development and recreation.

Nongame Wildlife Specialists census tree-nesting colonies of more than 100 pairs every year and other colonies every three years. Data is also collected from federal personnel, area wildlife managers, university researchers and other volunteers. Special emphasis is placed on Common and Forster's terns, and some grebe colonies.

The data is collected and entered into a computer database with site location, habitat, ownership and possible threats to the colony. Currently, 6725 records for 933 colony sites are in the database. This data is an important source of information for environmental reviews, ecological research, and mapping the geographic distribution of colonial waterbirds.