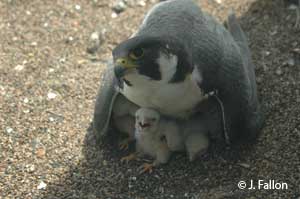 Once absent from the cliffs of the Mississippi River valley and lake Superior shoreline peregrine falcons (Falco peregrinus) have been restored to Minnesota skies, bluffs and cliffs. The cooperative efforts of the Nongame Wildlife Program, Raptor Center, Nature Conservancy, Bell Museum, and private propagators throughout the nation have all played an important role in restoring peregrine populations. Presently there are 53 sites in Minnesota with peregrine occupancy, 45 of which had young or laid eggs. In 2010, 39 pairs successfully fledged 116 chicks! Peregrines nest and raise young annually at traditional cliff nest sites along the North Shore of Lake Superior, as well as on the bluffs along the Mississippi River. In addition, many pairs nest at man-made habitats of power plant stacks, skyscraper balconies and rooftops in St. Paul, Minneapolis and Rochester, and on bridges over the Mississippi River. The Minnesota Nongame program provides monitoring as well as banding assistance to the Minnesota peregrine project.

You can read more about this amazing recovery in the Minnesota Conservation Volunteer article "A Passion for Peregrines" and watch some in real time with our Peregrine Falcon webcam! 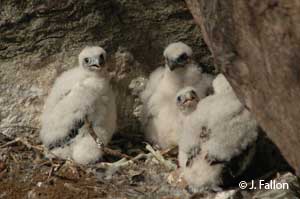 The peregrine falcons scientific names (Falco peregrinus) literal translation is Falcon Wanderer. Baby falcons are called eyasses. They are covered with white down which is replaced with feathers at about 3 weeks of age. It is at this age that biologists usually leg band the babies and take blood for identification and historical purposes. Eyasses are helpless. Both parents take part in the incubation of eggs and the feeding of the young. They fledge from the nest at about 30 days of age. Peregrines have been known to live more than 15 years. They usually reach breeding capability by two years of age. 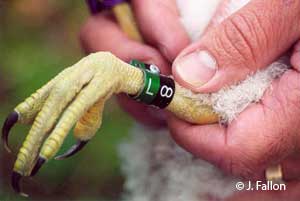 Peregrine falcons are the fastest birds in the world. They have been clocked diving (stooping) at over 224 miles per hour! They are carnivores that feed strictly on birds that they take in the air. Their prey includes ducks, pigeons and pheasants.

The importance of the North Shore peregrine nest sites was recognized through designated as an "Important Bird Area" by Audubon Minnesota.

Watch the video of Peregrine banding

at the Bremer Building in St. Paul, MN.