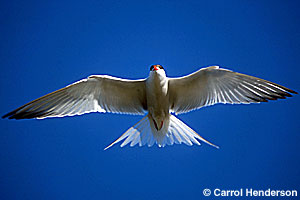 Since l982, the Department has overseen monitoring of these rare species. The piping plover (Charadrius melodus) is endangered, and the common tern (Sterna hirundo) is classified as threatened. Both species nest in Lake of the Woods County. Program emphasis includes monitoring nest productivity, nest protection measures, and habitat improvement. In l999 there were only three pairs of plovers found in the state. Currently there are five nesting colony sites for the common tern, and a statewide population of fewer than 900 nesting pairs. In 2004 piping plovers did not nest anywhere in Minnesota, presumably due to continued erosion and problems at nesting sites. Currently, there are two common tern nesting sites in Lake of the Woods County, one on Pine/Curry Island, and the other on the NW Angle Islands.