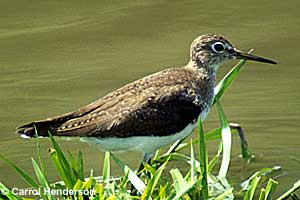 Shorebirds are among the most remarkable creatures on earth. Each year, most undertake phenomenal migrations from their wintering grounds as far south as southern South American, en route to their breeding grounds as far north as the Arctic Ocean. On these extraordinary journeys, shorebirds face increasing threats because they depend upon shorelines and wetlands, both coastal and along interior waterways. Lack of habitat is compounded by increased threats from water pollution, high rates of predation, and other factors which make their journey more perilous every year.

There are 74 shorebirds species in the Western Hemisphere. More than a third are in decline. At least five are highly imperiled and 22 are conservation priorities. Closer to home, nesting and migratory shorebirds historically have been important components of Minnesota's landscape despite serious habitat loss and degradation of wetlands and grasslands. Shorebirds are one of the Nongame Wildlife Program's priorities for southwest Minnesota.

Managing for shorebirds in the Prairie Parkland Province is challenging because of the dynamic nature of wetland conditions over time and across the landscape. Conservation of shorebird habitats benefits many other species, including waterfowl, migratory birds, amphibians and reptiles, commercial and recreationaly valuable fish, and endangered and threatened species. Shorebirds can be valuable indicators of environmental health. Shorebird viewing attracts many wildlife watching tourists which are an economic boon for nearby communities. Shorebirds serve as a valuable vehicle for cooperative conservation.