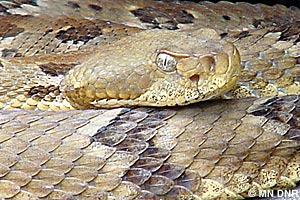 The timber rattlesnake (Crotalus horridus) is a state threatened species and is only found in the blufflands of southeastern Minnesota. This docile snake, although venomous, poses little threat to humans, yet many people feel compelled to kill any snake they encounter, including timber rattlesnakes. Minnesota paid a bounty for timber rattlers until 1989. In the 1940's, nearly 6000 rattlesnakes were submitted for bounty in Houston County alone! By 1987, fewer than 200 snakes were turned in for bounty in the same county. Intensive harvest had a tremendous impact on Minnesota's rattlesnake population. So much so that the species was listed as threatened in 1996. Today, we still have rattlesnakes in Minnesota, but their range has reduced, and many once active dens are now gone.

The timber rattlesnake inhabits south and west-facing bluff prairies with associated forest. In May, snakes emerge from their dens and begin sunning on rock ledges and outcroppings. Gravid females remain around the den until they give birth to live young in September. Nongravid females and males disperse around the end of May to mid-June. These snakes search for rodents and small birds in forests and bottomlands within two miles of their dens.

Because rattlesnakes are declining throughout their range, the Nongame Wildlife Program embarked on a survey effort to assess areas where snakes were known to occur historically and where snake-human encounters were increasing. These spring surveys have revealed good and bad news. The bad news is that many once active dens are no longer active. Furthermore, much of the bluff prairie habitat the snakes depend on is getting severely overgrown with eastern red cedar. The good news is that there are still areas where the snake population appears to be stable, with signs of reproduction. In addition to spring surveys, the Nongame Wildlife Program is also conducting bluff prairie restoration to improve habitat for snakes and minimize snake-human encounters. So far, the habitat work has been very productive in restoring bluffs back to their prairie origins.