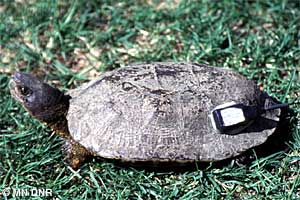 The wood turtle (Glyptemys insculpta) is a threatened species in Minnesota. A turtle once common to Minnesota's medium-sized to small gravel bottomed streams along the eastern half of the state, is now found in only a handful of places in southeastern and northeastern Minnesota. Wood turtles are a river species, spending their lives in and around river systems. They will stage on sand bars and sandy riverbanks in the spring for breeding, and then will disperse to summer foraging grounds. Wood turtles eat a variety of foods including berries, earthworms, snails and insects. While they are a long-lived species, they face significant threats from development pressure, recreation, and degrading water quality in our river systems.

Since 1998, the Nongame Wildlife Program has been monitoring these wood turtles along several southeastern Minnesota streams to determine population size and age, range and habitat use. This monitoring has involved extensive telemetry work to follow adult and juvenile turtles throughout the field season to determine habitat preferences and movements. The goal is to develop habitat management plans with landowners along these rivers, to help them preserve Minnesota's only terrestrial turtle.