This subsection occupies a glacial lake bed and consists of a relatively narrow band of lacustrine clays located along the south and west shore of Lake Superior. Topography is level to gently rolling, except along rivers and streams. Water has cut significantly deep valleys throughout the region and red clayey sediments are deposited into Lake Superior. Presettlement vegetation consisted of forests dominated by white spruce, white pine, and aspen-birch. Land uses include agriculture, recreation, and forestry.

A glacial lake plain covers almost all of the subsection (Hobbs and Goebel 1982, Farrand 1982). It is about 400 feet above the present level of Lake Superior. There are some small, isolated areas of end moraine associated with the Highland Moraine to the north. The plain is deeply dissected by numerous rivers and small streams.

Thickness of glacial drift over bedrock ranges from 50 to 100 feet. Bedrock is not exposed at the surface except in localized outcrops along streams. Bedrock consists of Precambrian (Middle Proterozoic) sedimentary bedrock, primarily feldspathic to quartzose sandstone and shale, and including lithic sandstone and siltstone (Morey et al. 1982). The shale is locally copper-rich (Dorr and Eschman 1984).

The inner portion of this subsection is composed of clayey sediments, corresponding to the deepest part of the glacial lake. Clay soils occupy a little more than half of the unit. Around this is a zone of sandy soils. The clayey soils are cold well-drained soils developed under forest vegetation. The sandy soils are sandy, excessively well to poorly drained undeveloped soils.

The subsection has a well-developed drainage network. The Nemadji River and its tributaries have incised narrow, v-shaped valleys up to 150 feet deep. Sediment movement into the rivers and streams continues even after significant efforts by the state and federal government to control it. There are no natural lakes found in the subsection. 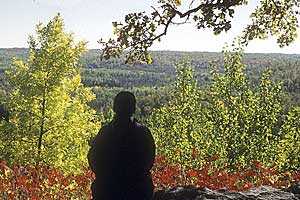 This subsection was almost completely forested. Marshner (1974) classified the presettlement vegetation as pine flats, consisting of hemlock, spruce, fir, cedar, and white pine. This was the western extent of eastern hemlock.

Forestry is the major land use. Significant portions of the subsection are undeveloped. Following logging, quaking aspen is a common dominant throughout the subsection. Yellow birch is more common in this subsection than elsewhere in the state. Presence of a significant trout population in the Nemadji River and its tributaries draws many people.

Windthrow was a significant natural disturbance in this unit, particularly in areas with clayey soils where, tree rooting depths are shallow. Another important natural disturbance is soil slumping and sliding due to instability and low strength of the clayey sediments. There are several good examples of this along Minnesota Highway 23.