Gently rolling till plains and drumlin fields are the dominant landforms in this ecoregion. The jewel of the region is Mille Lacs Lake, well known for walleye fishing. Brown and red till forms the parent material. In the southern portion, upland hardwood forests consisting of northern red oak, sugar maple, basswood, and aspen-birch were common before settlement. Presently, forestry, recreation, and some agriculture are the most common land uses.

This subsection consists primarily of Superior lobe ground moraine, and includes the Brainerd-Pierz and Automba Drumlin Fields (Dept. of Soil Science, Univ. of Minnesota 1977, 1980b, Hobbs and Goebel 1982). The depressions between drumlin ridges contain peatlands with shallow organic material. There are also small areas of Des Moines lobe ground moraine in the southeastern portion of the subsection (Hobbs and Goebel 1982). A large end moraine in the center of the subsection forms the dam that created Mille Lacs Lake. In the northeast, there is another series of end moraines, which marked later advances and retreats of the Superior lobe.

Glacial drift ranges from 100 to 300 feet in depth over bedrock. Bedrock is locally exposed throughout the northern portion of the subsection, where depths are typically 100 feet or less (Olsen and Mossler 1982, Trotta and Cotter 1973). Bedrock consists of Middle to Late Archean and Early Proterozoic gneiss, amphibolite, undifferentiated granite, and metamorphosed mafic. At the southeastern edge of the subsection are Cretaceous marine shale, sandstone, and variegated shale (Morey 1976, Morey et al. 1982, Ostrom l98l).

At the eastern end of the subsection, the end moraines and ground moraines have loamy soils. Typically, there is dense glacial till underlying most soils in this subsection. This dense till impedes water movement throughout the soil profile. The soils are described as acid, stony, reddish sandy loams, silt loams, and loamy sands (Hole 1976, Hobbs and Goebel 1982). The parent material in the Grantsburg (Des Moines Lobe) portion of the subsection is more calcareous and finer textured than Superior Lobe sediments. It is underlain by Superior lobe drift which is locally exposed. The soils are classified as Boralfs (well-drained soils developed under forest vegetation) and Ochrepts (poorly developed soils formed under forest vegetation) on the moraines (Anderson and Grigal 1984).

This subsection has little moderation from Lake Superior. Total annual precipitation ranges from 27 inches in the west to 30 inches in the east, with growing-season precipitation ranging from 12 to 13 inches. Snowfall is relatively light- the location of the subsection, primarily southwest of Lake Superior, is not characterized by lake-effect snows (Albert 1993). Growing-season length is quite variable, ranging from 97 to 135 days, with the longest growing season in the south and the shortest on the outwash plains at the northern edge of the subsection (Dept. of Soil Science, Univ. of Minnesota 1977, 1980b).

Major rivers running through this subsection include the St. Croix, which forms part of the eastern boundary and the, Kettle, Snake, Rum, and Ripple rivers. The drainage network is young and undeveloped, with extensive areas of wetlands present. There are 100 lakes greater than 160 acres in size. Most occur on end moraines. 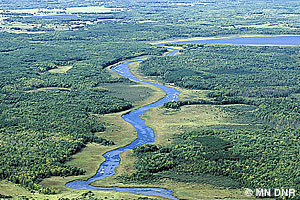 The original vegetation consisted of a mosaic of forest types. Along the southern boundary, maple-basswood forests were prevalent. The rest of the subsection was a vast mix of conifer, hardwood and mixed conifer-hardwood forests. Peatland areas were inhabited by sedge-fen, black spruce-sphagnum, or white cedar-black ash communities.

Agriculture is concentrated in the western and southern portions of this subsection. Forestry and recreation are the most important land uses in the central and eastern part. There are large areas in eastern Pine County that are still heavily forested and relatively undisturbed, although there are no significant examples of large white pine stands still present.