The extent of this subsection was determined primarily by the extent of the bedrock controlled landscape. The southern and western boundaries were based on LTA-level boundaries on the Superior National Forest.

Lakes and rocky ridges characterize this landscape of glacially-eroded bedrock and poor soils. Historic forest types on uplands were mostly aspen-birch, aspen-birch-conifer, and on dry sites, jack pine barrens. Much of this subsection consists of the BWCA, which is an internationally known wilderness area. Recreation, tourism, and forestry are the major land uses.

This subsection consists of scoured bedrock uplands or shallow soils on bedrock, with large numbers of lakes. Glacial ice moved from west to east across the subsection, deepening stream valleys in the bedrock. Long, east-west oriented lakes now occupy these enlarged valleys (Dept. of Soil Science, Univ. of Minnesota 1981b). Topography is dominantly rolling with irregular slopes and many craggy outcrops of bedrock. Eagle Mountain, topping out at 2301 feet, is the highest point in Minnesota.

Thin glacial drift covers much of the subsection and bedrock exposures are common (Dept. of Soil Science, Univ. of Minnesota 1981b). The subsection has Precambrian-age (Late Archean and Early Proterozoic) bedrock, including gneiss, undifferentiated granite, and metamorphosed mafic to intermediate volcanic and sedimentary rocks (Sims et al. 1970c, Morey 1976).

The soils are derived from a mantle of acid, cobbly, and gravelly glacial till of variable depth. Coarse-loamy to coarse soil textures are most common. There are small areas of sandy and clayey lacustrine soil in the western portion of the subsection. About 5% of the unit is occupied by organic soils. The soils are classified as Ochrepts, with localized Aquents and Hemists (Anderson and Grigal 1984).

The subsection has a cool continental climate, with short warm summers and long winters (Heinselman 1973). Annual precipitation averages 28 inches and the mean annual temperature is 2 degrees C. Growing season length ranges from 108 to 123 days (Dept. of Soil Science, Univ. of Minnesota 1981b).

There are over 300 lakes larger than 160 acres; these cover about 13% of the subsection's surface (Dept. of Soil Science, Univ. of Minnesota 1981b). The drainage network is very angular due to development in shallow sediments over bedrock. Rivers traversing this subsection include the Vermilion, Sioux, Moose, Portage, Kiwishiwi, and Brule. 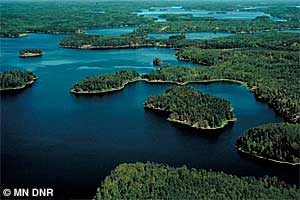 Heinselman (1974) describes the major forest communities as jack pine forest, white pine-red pine forest, and hardwood- conifer forest. The latter community was dominated by balsam fir, white spruce, paper birch, and quaking aspen. Fire dependance characterizes all of these forest types. Jack pine is most prevalent in the two areas where the landscape is least dissected by small lakes, north of Vermilion Lake and within and north of the Sawbill Outwash Plain. Areas most dissected by lakes are where white pine-red pine forests are most common, probably as a result of partial fire protection (Albert 1993).

Most of the subsection remains forested, with most forest types persisting with stand composition and structure similar to that present originally. Logging occurred within the subsection, but large areas remain unlogged. Heinselman (1973) maintained that this was because of the relatively sparse densities of forest stands, particularly white and red pines. Grigal (personal communications), however, maintains that the lack of logging was also partially the result of two other factors. The first of these was inaccessibility. The second was that by the time timber harvesting began here, public sentiment for preservation had begun to be heard.

The average interval between significant fire years was about 4 years in presettlement time and a natural fire rotation of about 100 years was characteristic of the area (Heinselman 1973). Lightning caused many fires; the importance of Native American fire management in the area has not been established. Heinselman's work indicated that major fires occurred during drought years. Major drought years occurred 2-3 times per century. The timing of the fire, spring or fall, determined how severely soils burned and which tree species regenerated. Pollen records indicate that the fire history has not changed substantially for several thousand years.

Species in Greatest Conservation need for the Border Lakes Subsection