The boundary of this subsection follows the Highland Moraine along Lake Superior. In general, the boundary parallels the shore about 20 to 25 miles inland.

This subsection occupies the area adjacent to Lake Superior. It is gently rolling to steep. Bedrock outcroppings are common and soils are commonly shallow. Soils are formed in red and brown glacial till and are very rocky. Lake Superior dominates this region. It moderates the climate throughout the year, acting as an air conditioner in summer and a heat sink in winter. Presettlement vegetation was forest, consisting of white pine, red pine, jack pine, balsam fir, white spruce, and aspen-birch. Present land uses include recreation, tourism and forestry.

Glacial drift is thin over the entire subsection and bedrock is exposed or near the surface in large areas. The underlying bedrock consists of Upper Precambrian (Middle Proterozoic) basalt, rhyolite, gabbro, diabase, anorthosite, granite, sandstone, and shale (Morey 1976).

The soils are developed from rocky, red tills of the Superior Iobe. Textures range from sand to clay (Hobbs and Goebel 1982). Loams and sandy loams are the most common soil textures on the moraines, which occupy most of the subsection. The Highland Flutes, along the eastern edge of the subsection, have a predominance of thin soils over bedrock and clayey soils (Dept. of Soil Science, Univ. of Minnesota 1981b). The Nemadji-Duluth Lacustrine Plain has about 95% clayey soils. The most common soils in the subsection are classified as Orthents, Ochrepts, and Boralfs (Anderson and Grigal 1984).

Lakes make up about 2-3% of the subsection; there are 20 lakes larger than 160 acres in size. 17 of these are located on the Highland Moraine (Dept. of Soil Science, Univ. of Minnesota 1981b). Numerous short streams, 10-15 miles long, lead directly from the highland to the shores of Lake Superior. Most of them have water falls near the shoreline (Wright 1972). 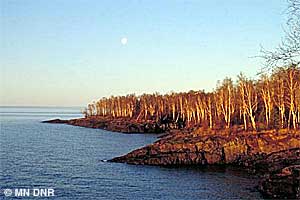 Almost the entire subsection remains forested, with forest management and recreation as the major land uses. Following logging, the extensive white pine-red pine forests have been replaced by forests of quaking aspen-paper birch. Tourism and mining are the other important land uses. There are no mines within the subsection, but ports were set up to get ore from the iron range to steel mills in Indiana and Ohio. The city of Duluth has a large port area and ships significant amounts of agricultural commodities, as well as iron ore.

Fire was an important disturbance. This is readily apparent in the northern half of the subsection, where there was a dominance of aspen-birch stands, which are pioneer species. Spruce budworm defoliation was and continues to be a significant disturbance to stands of balsam fir and spruce.