Brown glacial sediments form the parent material for much of this subsection. Landforms include end moraines, outwash plains, and lake plains. Soils are varied and range from medium to coarse textures. One unique aspect of this region is the Giants Range, where the majority of iron mining in Minnesota takes place. It is a high narrow ridge trending northeast to southwest and caused by bedrock. This region consisted of forest communities dominated by white pine, red pine, balsam fir, white spruce, and aspen-birch. Forestry and mining are the most important land uses presently.

The subsection includes rolling till plains and moraines and flat outwash plains formed by the Rainy Lobe glacier. Most striking is the Giants Range, a narrow bedrock ridge towering 200 to 400 feet above the surrounding area. It trends southwest to northeast. Bedrock is locally exposed in the end moraines. Small bogs and potholes are common.

Thickness of glacial drift is quite variable across the subsection. On moraines, till plains and outwash plains drift is commonly greater than 100 feet over Precambrian (Late Archean and Early Proterozoic) bedrock that includes gneiss, undifferentiated granite, and metamorphosed mafic to intermediate volcanic and sedimentary rocks. Giants Range has a thin blanket of drift over granite. Immediately to the south is the iron-formation of the Iron Range, which has been heavily mined, first for "soft" iron ore and later for taconite.

Soils are formed in sandy to fine-loamy glacial till and outwash sand. Soils on the Nashwauk Moraine have a loamy cap with dense basal till below at depths of 20 to 40 inches. They are classified as boralfs (cold, well-drained soils developed under forest vegetation). Other areas north of Giants Range have coarse-loamy to sandy soils classified as boralfs, orthents, and ochrepts.

Precipitation averages between 24 and 27 inches, with the lowest amounts at the western edge of the subsection. About half of the precipitation arrives during the summer months. The growing season ranges from 106 to 121 days.

There are over 63 lakes greater than 100 acres in size in this subsection. Many are found on the Nashwauk Moraine. The Continental Divide follows the summit of Giants Range. Water flowing north eventually goes into Hudson Bay. On the west side, waters flow into the Mississippi River watershed. To the south, water flows into Lake Superior. 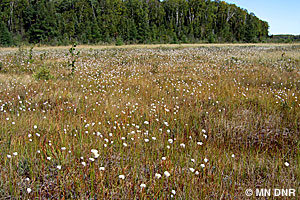 Presettlement vegetation was a mixture of deciduous and coniferous trees. White pine-red pine forest and jack pine barrens were common on outwash plains. Aspen-birch forest and mixed hardwood-pine forest were present on moraines and till plains. Wetland vegetation included conifer bogs and swamps.

Land ownership is roughly equal between public and private in St. Louis County and mostly public or forest industry in Itasca County. Quaking aspen is the dominant tree species presently. Forest management and recreation are the most important land use in this subsection. Mining is also an important land use.

Windthrow had the strongest impact on the moraines. Fire had a lesser impact overall but was more prominent on the outwash plains.

Species in Greatest Conservation need for the Nashwauk Uplands Subsection