The subsection is bounded on the east by an outwash plain and a moraine in the North Shore Highlands Subsection. Till plains without drumlin features border this subsection to the north. To the west is a lake-washed till plain in the Tamarack Lowlands Subsection.

A drumlin field dominates this subsection. Topography is rolling, with a washboard-like pattern of ridge and troughs. Presettlement forests were a mixture of coniferous and deciduous trees. Soils are formed in medium to coarse-textured Superior and Rainy lobe glacial till. Forestry is the most common land use today. The Toimi Uplands Subsection covers 339,300 acres (530 square miles) in the Arrowhead Region of Minnesota.

This subsection is dominated by a drumlin field. Drumlin ridges are typically about a mile long, ¼-mile wide, and 30 to 50 feet high. The drumlins are oriented in a southwest-northeast direction. Their parallel arrangement is like a landscape-scale washboard. Interdrumlin areas are usually poorly or very poorly drained.

Glacial drift is generally less than 100 feet thick. Localized outcrops of bedrock are present, especially along the eastern edge of the subsection. All of the bedrock underlying this unit is Precambrian in age. In the north, Keweenawan bedrock includes sandstone, arkose, shale, basaltic to rhyolitic lava flows and pyroclastic rocks, gabbro, troctolite, ferrogabbro, anorthosite, and peridotite. To the south, Upper Precambrian quartzite is extensive.

There are about 46 lakes in this unit that are greater than 10 acres in size. Streams are common and most flow southwest because of drumlin orientation. 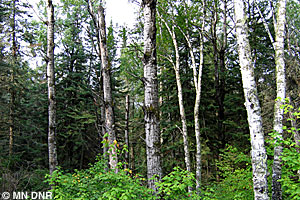 The major forest type found on drumlin ridges was aspen-birch trending to conifers, with only small areas of white pine-red pine forest. Conifer swamp or bog occupied the depressions between most of the drumlins.

This unit is still dominantly forested, most of which is in public ownership. The most important land use is forestry. Much of the upland is occupied by quaking aspen, either in relatively pure stands or mixed with balsam fir. Recreation is important around areas where there are lakes and rivers. Hunting is popular because of the extensive amount of public land in this unit.

Fire occurred frequently enough to keep much of the unit in aspen-birch forest. The interdrumlin lowlands, with significant areas of sedge meadows, channeled fires in a southwest-northeast direction. When southwest winds were strong, fire would burn a significant portion of the uplands. Windthrow was another significant natural disturbance.

Species in Greatest Conservation need for the Toimi Uplands Subsection