The northern boundary is Giants Range in the west and the Canadian shield in the east. The southeastern boundary consists of a Superior Lobe moraine and till plains. The southwest boundary is a drumlin plain.

Brown glacial sediments form the parent material for much of this subsection. Landforms include till plains and outwash plains. Soils are varied and range from medium to coarse textures. This region consisted of forest communities dominated by aspen-birch, jack pine barrens, and red pine and white pine on the uplands, and conifer bogs and swamps on the lowlands. Forestry is the most important land use presently with some mining occurring on the northwest corner of the subsection.

Thickness of glacial drift ranges from very thin in the north to up to 100 feet thick in the south. The Precambrian (Late Archean and Early Proterozoic) bedrock includes gneiss, undifferentiated granite, and metamorphosed mafic to intermediate volcanic and sedimentary rocks.

Upland soils are predominantly well drained sandy loam with variation in subsoil textures. The moraine and till plains in the northern half are underlain by sand. To the south, is sandy loam till. The soils are a mix of boralfs and ochrepts.

Annual precipitation averages between 24 and 27 inches. About half of the precipitation arrives during the summer months. The growing season ranges from 106 to 121 days.

There are approximately 30 lakes at least 160 acres in size in this subsection. The major rivers in this subsection are the Cloquet and the St. Louis both of which flow to Lake Superior. The central two-thirds of the subsection drains north into the Rainy River. 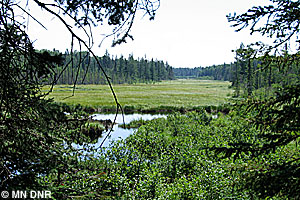 Presettlement vegetation was a mixture of deciduous and coniferous trees. Areas with sandy loam till were predominantly aspen-birch trending towards conifers with smaller areas of white pine-red pine forest. Jack pine barrens were present on areas with sandy subsoils. Wetland vegetation included conifer bogs and swamps.

Forest management is the most important land use in this subsection. There are extensive areas of forested public land which are managed for wood products and recreation. Quaking aspen is the dominant tree species presently.

Fire appears to be the predominant disturbance historically.

Species in Greatest Conservation need for the Laurentian Uplands Subsection