The western edge of the subsection lies just west of the Littlefork River. This river is a natural boundary between the extensive peatlands to the west and predominately clayey till and lake-laid mineral sediments to the east. The southern boundary is the southeastern corner of Glacial Lake Agassiz. To the east, the boundary is the Vermilion River up to the point where it turns east and enters Crane Lake. This boundary marks the division between bedrock-controlled uplands with shallow soils and glacial lake plain with bedrock knobs present but not dominant.

This is a level to gently rolling lake plain and transition zone to the Border Lakes region to the east. Soils are clayey to loamy and formed from lake-laid sediments and glacial till. Topographic relief is less than 50 feet on most of the lake plain, becoming greater to the east in the transition zone.

This subsection is transitional between extensive peatlands to the west and bedrock controlled landscape to the east. The major landform on the west side is lake plain. On the east side, the glacial lake had a very irregular shoreline. It squeezed between bedrock outcrops, depositing sediments like fillings in teeth. The elevation grades from 1100 feet in the northwest corner to 1500 feet in the southeastern corner around Lake Vermilion.

Glacial drift depth grades from shallow at the northern and eastern edges of the subsection to moderately thick in the western portion. Bedrock outcrops are common in the transition zone to the Border Lakes Subsection. Drift is up to 300 feet thick on the western side of the subsection. The underlying bedrock is Precambrian (Late Archean) in age, and includes gneiss, amphibolite, undifferentiated granite, and metamorphosed mafic to intermediate volcanic and sedimentary rocks. There are also iron formation, metasediments, and metamorphosed felsic volcanic rocks (Morey 1976).

Soils in this subsection are primarily moderately well to poorly drained mineral soils formed from clayey lake-laid sediments or loamy to clayey glacial till. Organic soils are common, but do not dominate the landscape (as they do to the west in the Agassiz Lowlands). Peat depths vary from shallow to deep (1 to 15 feet thick). Soils are classified primarily as Aqualfs (wet forested soils), Aquents (wet undeveloped soils), Boralfs (well to moderately well drained forested soils), and Hemists (moderately decomposed peat) (Anderson and Grigal 1984).

This subsection is framed by the Littlefork River on the west side and the Vermilion River on the east side. Topography is level to gently rolling throughout most of the subsection. The drainage network is undeveloped, with rivers and streams meandering extensively, especially in the western part. Major rivers flowing through include the Littlefork, Vermilion, Ash, Blackduck, Lost, Rat Root, and Rainy. Lakes are concentrated in the southeastern part. Larger ones include a portion of Vermilion Lake, Pelican Lake, and Net Lake. There are very few lakes in the western part of the subsection. 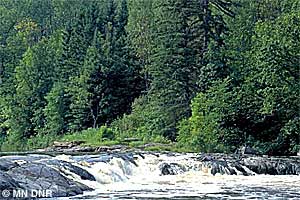 Quaking aspen is the most common species of tree in this subsection. It is found in both pure and mixed stands. It is heavily harvested for pulp (Grigal, personal communication). Aspen is probably the best developed forest type on the uplands, and it probably was similarly common before settlement. Logging of conifer forests also occurs. In the past, attempts were made to farm portions of the peatlands. (Heinselman 1963). Ditches were dug along section lines, but were not effective. The other important land use is recreation, particularly in the southeastern section where there are several prominent lakes and reservoirs.

Species in Greatest Conservation need for the Littlefork-Vermilion Uplands Subsection