This subsection encompasses the portion of Glacial Lake Agassiz plain where peatlands are dominant. The southern boundary is the southern edge of the lake plain where it abuts Des Moines Lobe ground moraines and end moraines. The western boundary is based on separation of lands dominated by conifer bog from lands dominated by wet prairie, as delineated on Marshner's "Original Vegetation of Minnesota" map (Marshner, 1974). The eastern boundary separates that portion of the lake plain that is primarily peatland from wet to dry mineral sediments.

This subsection is characterized by a flat, poorly drained lake plain. Local topographic relief is less than 50 feet on most of the plain. The peatlands are dominated by bog forest species (black spruce and tamarack). Upland sites are commonly vegetated by aspen-birch and jack pine. Forestry and tourism (associated with large lakes within the subsection) are the major land uses.

Glacial drift is thinnest at the northern and eastern edges of the lake plain, where bedrock is locally exposed (Olsen and Mossler 1982). Drift is up to 300 feet thick at the western edge of the basin. The underlying bedrock is Precambrian (Late Archean) in age, and includes gneiss, amphibolite, undifferentiated granite, and metamorphosed mafic to intermediate volcanic and sedimentary rocks. There are also iron formation, metasediments, and metamorphosed felsic volcanic rocks (Morey 1976).

Soils in this subsection are predominantly organic (Dept. of Soil Science, Univ. of Minnesota 1980c, 1981b). There is a greater percentage of organic soils in the center of the lake basin, with increased amounts of poorly drained mineral soils near the edges. About 75% of the soils are peats in this portion of the basin. Peat depths can exceed 15 feet (Heinselman 1963). Soils are classified primarily as Hemists, Aqualfs, and Aquents (Anderson and Grigal 1984). Hemists occupy the center of the lake basin, whereas Aqualfs and Aquents are present along the margins of the basin.

This subsection is virtually level, which is reflected by the drainage network. Extensive ditching of the peatlands was done in the earlier part of this century in an effort to promote agricultural development of the region. These efforts were unsuccessful however. The Big Fork and Rainy Rivers are the largest rivers running through the subsection. The Rainy River forms part of the northern boundary of the subsection as well as the state. There are three large lakes that are remnants of Glacial Lake Agassiz. They are Lower Red Lake, Upper Red Lake, and Lake of the Woods. 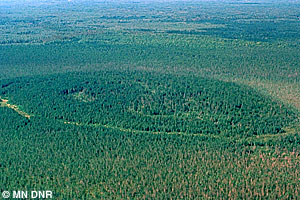 Marschner (1974) mapped most of this subsection as peatland. Plant communities included in this classification were sedge fen, black spruce-sphagnum bog, and white cedar-black ash swamp. There were also low moraines and beach ridges dominated by jack pine forest or quaking aspen-paper birch forest. Recent ecologists have classified the peatland as a number of plant communities, with the plant species present in each community responding to differences in water flow and water chemistry (Heinselman 1963, 1970, Glaser et al. 1981, Glaser 1983).

Forestry and recreation are the major land uses. Black spruce, jack pine, and quaking aspen are the most common species utilized for paper making and sawlogs. Recreation and tourism are associated with the three large lakes.

Fire occurred in the peatlands. Insect infestations, such as spruce budworm probably lead to these fires. Water level fluctuation, caused both by short-term climatic changes and by beaver dams, probably contributed to tree mortality. Windthrow was common on the poorly drained mineral soils (Albert 1993).

Species in Greatest Conservation need for the Agassiz Lowlands Subsection