The southern boundary is Leech Lake and the moraines south of the lake. The northern boundary is the southern shore of Glacial Lake Agassiz. On the east side, the boundary of the subsection is a series of end moraines (Rainy Lobe in origin, but later covered by the St. Louis Sublobe). The west side is framed by the Alexandria Moraine Complex.

Thick glacial drift covers bedrock over most of the subsection. Drift thicknesses range from 200 to over 600 feet. The underlying bedrock consists of a diversity of Precambrian rock, including Early Precambrian (Late Archean) and Middle Precambrian (Early Proterozoic) gneiss, undifferentiated granite, and meta-morphosed mafic to intermediate volcanic and sedimentary rocks (Morey 1976; Morey et al. 1981)

Soils range from sandy to clayey, depending on parent material. Most fall in the Alfisol, Entisol, or Histosol orders. On moraines, most soils are loamy well to moderately well drained and are classified as Boralfs. Soils on the outwash plain are dominantly sandy and excessively well drained. They are classified as Psamments (young, undeveloped sandy soils).

The major river running through this subsection is the Mississippi River. The headwaters is just to the south in the Pine Moraines and Outwash Plains Subsection. Two large bodies of water are present, Lake Winnibigoshish (a reservoir) and Cass Lake. The drainage network throughout the subsection is poorly developed due to the age and characteristics of the landforms. 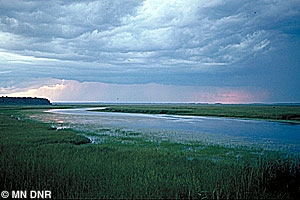 Much of this subsection is presently forested and forestry is one of the most important land uses. Aspen is the most common tree species. It is found in both pure stands and mixed stands with birch, maple, oak, white spruce, jack pine, and red pine. Tourism and recreation is the other important land use. There are many lakes present and most are developed with summer homes. Agriculture is important locally, particularly in the western part.

Fire was an important disturbance within the white pine-red pine forests and jack pine forests/woodlands. However, it is not clear whether the fires were from the Bemidji Outwash Plain immediately to the south or from lightning fires originating within the pine stands themselves.

Species in Greatest Conservation need for the Chippewa Plains Subsection