Rolling to steep slopes characterize much of this subsection. End moraines are the dominant landform. The underlying topography was formed by the Rainy lobe. It was later overridden by the St. Louis sublobe of the last glaciation period. Northern hardwood forests were common in the southern portion of the region, south of Grand Rapids. North of Grand Rapids, white pine, sugar maple, basswood, and balsam fir were common tree species. Presently, forestry and tourism are the major landuses.

This subsection consists of distinct end moraines associated with the St. Louis and Koochiching Sublobes. and a pitted outwash plain (Hobbs and Goebel 1982). These sublobes overrode Rainy Lobe moraines, which formed the framework of landform characteristics. The cap of calcareous gray sediment varies from 1 to 10-plus feet in depth. Coarse loamy Rainy Lobe sediments underlie the cap. Portions of this unit, both north and south of Grand Rapids, have very steep topography. These areas are ice disintegration features. Topography on the rest is gently rolling to rolling.

Loamy calcareous soils make up about 75% of the soils in this subsection (Dept. of Soil Science, Univ. of Minnesota 110-1971). Excessively well-drained outwash sands account for another 10 to 15% and poorly drained soils account for about 3%. The soils are classified as Boralfs (well drained soils developed under forest vegetation), Aqualfs (wet soils developed under forest vegetation), Hemists (moderately decomposed organic soils), and Psamments (sandy, poorly developed well-drained soils), with Boralfs most common (Cummins and Grigal 1981).

The Mississippi River cuts this subsection virtually in half. The river flows northwest to southeast close to the north-south midpoint of the subsection. Several small, relatively short rivers are present. They include the Prairie, Willow, Hill, and Moose rivers. The drainage network is poorly developed due to landform characteristics. Lakes are numerous. In fact, there are over 66 lakes that have a surface area greater than 160 acres; lakes account for over 10% of the surface area. 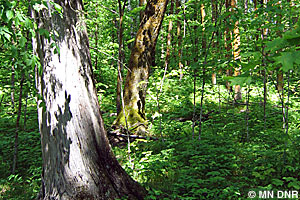 White pine-red pine forest covered large portions of the steep moraines and portions of the pitted outwash along the eastern edge of the subsection. South of Grand Rapids was an area of moraine dominated by northern hardwoods. Aspen-birch forests also grew on the moraines, but were more common on the outwash, which had excessively well drained sandy soils. Mixed hardwood-pine forest was locally present on the moraines, generally near large lakes. Conifer swamp and bogs were scattered throughout the subsection, occupying both kettles and linear depressions in the pitted outwash and moraines (Albert 1993).

The most important land uses in this subsection are forestry and recreation. This area is heavily forested and timber harvesting is extensive. Quaking aspen is the primary species harvested. Recreation is primarily associated with the subsection's lakes and the areas around them. Fishing, hunting, snowmobiling, and skiing are popular.

Fire and windthrow were the most common natural disturbances. Fire was an important agent in maintaining fairly pure red and white pine stands.