The Itasca Moraine forms most of the northern boundary. To the west, the east side of the Alexandria Moraine is the dividing line. Rainy Lobe ground moraine and end moraines form the eastern boundary.

This subsection is a mix of end moraines, outwash plains, till plains, and drumlin fields. White and red pine dominated the majority of forest communities on end moraines and till plains. Jack pine barrens and jack pine woodlands were found on well-drained sites on outwash plains. Black spruce, tamarack, white cedar, and black ash were prominent tree species in poorly to very poorly drained soils. Lakes are very common on the end moraines and some of the Outwash plains. Current landuses include tourism, forestry, and some agriculture.

This subsection consists primarily of large outwash plains, narrow outwash channels, and end moraines (Hobbs and Goebel 1982). The moraines is relatively large and were formed from portions of several glacial lobes. Most of the glacial drift was sandy, but there is loamy drift to the north.

Thick glacial drift covers bedrock over most of the subsection. Thicknesses range from 200 to over 600 feet. The greatest depths are in the southwestern portion (0lsen and Mossler, 1982). A diversity of Precambrian rock underlies the glacial drift (Morey 1976; Morey et al. 1981). There are also iron formations at the southeastern edge of the subsection, along with argillite, siltstone, quartzite, and graywacke. Cretaceous marine shale, sandstone, and variegated shale are localized in the southwest. (Albert 1993).

The morainic soils are predominantly coarse to moderately coarse in texture (sands and sandy loams), although calcareous loamy soils are present on the Itasca Moraine and the Fosston Till Plain. (Dept. of Soil Science, Univ. of Minnesota 1969, 1980). On outwash plains, excessively drained sands are prevalent, but they are interspersed with numerous wetlands. Over 10% of the soils are organic. The soils are classified as Psamments and Aquents on outwash plains (Anderson and Origal 1984). Boralfs are most common on moraines.

Kettle lakes are common on pitted outwash plains and within stagnation moraines. There are hundreds of lakes within the subsection that have a surface area greater than 160 acres. The headwaters of the Mississippi River (Itasca Lake in Itasca State Park) is in this subsection. Other large rivers flowing through the outwash plains of the subsection include the Pine and Crow Wing rivers. 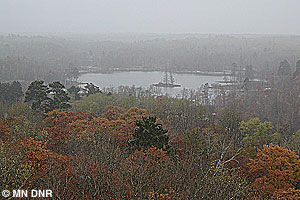 Jack pine, in a mix with northern pin oak, was the most common species on excessively drained portions of broad outwash plains. Large areas of the other landforms were dominated by aspen-birch and pine forests (mixed red and white pine). Red pine-white pine forests, occupied the rolling to irregularly sloped end moraines. Mixed hardwood and pine forests, dominated by a diverse mix of northern hardwoods and white pine, were found in the most fire-protected areas at the northern and eastern edges of the subsection. Fire protection was offered by irregular topography, broad wetlands, and relatively large lakes. Some of the hardwood-pine forests mapped by Marschner may have been dominated by northern red oak and basswood, without sugar maple (Albert 1993).

Forest management and tourism are the most important land uses. Agriculture is common in the west, where center pivot irrigation of corn and potatoes is common. Tourism is common where there are concentrations of lakes. Summertime swells the population of these areas significantly. Brainerd, a community of 14,000. absorbs more than ten times that number within a 30-mile radius during summer weekends.

Fire occurred on a 10 to 40 year rotation within much of the subsection, accounting for the dominance by upland conifers and quaking aspen-birch forests (Frissel 1973).