The boundaries of this subsection coincide with the boundaries of the Glacial Lake Upham Plain and the Aurora Till Plain. This is a unique area topographically and climatically. The till plain is included because it forms a relatively flat plain ecologically similar to the adjacent lacustrine plain.

Level to gently rolling topography are characteristic of this region. The largest landform is a lake plain. Around the edges of the old glacial lake is a till plain (Aurora Till Plain) formed in Superior lobe sediments. There is also a small piece of end moraine north of Sandy Lake that is related to the St. Louis moraines. Lowland hardwoods and conifers were the most common forest communities. Northern hardwood and aspen-birch forests were common on the other portions of this region. Presently, much of the land is in public ownership. Forestry and tourism, along with some agriculture are the most common land uses.

Glacial lacustrine (lake deposited) sediments occupy much of the subsection. Beach ridges are not well defined. The lake was probably not present at one level long enough to form distinct beach ridges (as are found in the Glacial Lake Agassiz basin, to the west). There is a ground moraine along the northern and southern borders of the Glacial Lake Upham basin. Low drumlin ridges. are present locally.

Glacial drift within the lake beds ranges from 100 to 300 feet thick, with some of the thickest sediments at the northern edge of the Glacial Lake Upham basin, where it meets the Mesabi Range (0lsen and Mosslet, 1982). The bedrock beneath Lake Upham is Middle Precambrian (Early Proterozoic) argillite, siltstone, quartzite, or graywacke, weakly metamorphosed (Morey 1976, Morey et al. 198~). There is also Cretaceous shale, sandstone, and clay near the southwest end of the basin and along the border with the Mesabi Range.

Soils include extensive areas of histosols (peats) over both fine-textured (silt and clay-rich) and sandy lacustrine deposits. Other soil orders present are entisols and alfisols. Soils are classified by Grigal and Anderson (1984) as primarily Ochrepts, Hemists, Aquents, and Boralfs. Alluvial soils are present along major rivers.

Total annual precipitation ranges from 24 inches in the northwest to 27 inches in the east, with about 40% occurring during the growing season. The growing season is short, from 92 to 115 days, as the low-lying subsection forms a frost pocket with late spring frosts and early fall frosts.

Several major rivers flow through this subsection. These include the Mississippi, St. Louis, Whiteface, East Swan, Savannah, and Willow rivers. Rivers and streams meander extensively across the subsection due to the predominately level landscape. There are few lakes present in the lake plain. The largest lake is Sandy Lake, which is a reservoir created by a dam on the Savannah River. 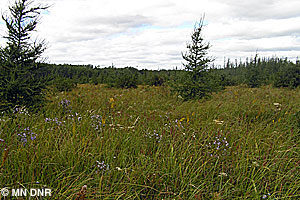 Vegetation in the lowlands was dominated by lowland conifers (black spruce, tamarack, and white cedar) and lowland hardwoods (black ash). Sedge meadows were also extensive. Uplands supported aspen-birch and upland conifer forest. White pine-red pine forests were located on the ground moraine at the edges of the lake plain, but were not extensive.

Forestry is the most important land use within the Tamarack Lowlands. There are some areas in the lake plain where agriculture is important, although most of the subsection is marginal for agriculture. Locally, tourism is important around Sandy Lake in Aitkin County.

Fire was probably important, both on the hardwood-conifer dominated uplands and in wetlands. Windthrow was probably important in the conifer swamps. In this type of flat, lacustrine setting, natural water-level fluctuations and flooding behind beaver dams often causes extensive tree mortality (Albert 1993).

Species in Greatest Conservation need for the Tamarack Lowlands Subsection