This subsection consists of an old plateau covered by loess (windblown silt) that has been extensively eroded along rivers and streams. It is characterized by highly dissected landscapes associated with major rivers in southeastern Minnesota. Bluffs and deep stream valleys (500 to 600 feet deep) are common. River bottom forests grew along major streams and rivers.

The area is a loess-capped plateau, deeply dissected by river valleys. The greatest relief occurs along the Mississippi River, where relief is up to 600 feet. In the east, loess lies directly on bedrock. In the southeast, loess overlies red clayey residuum that was formed directly from limestone or sandstone. Paleozoic sedimentary rocks are exposed in valley walls, but are generally mantled with colluvium or loess. Topography is controlled by underlying glacial till along the western edge of the subsection, where loess is several feet thick. As glacial drift thins to the east, topography is largely bedrock controlled (Dept. of Soil Science, Univ. of Minnesota 1973). Sinkholes are common in the southwestern portion of the subsection.

Depth of drift over bedrock varies from 0 to 50 feet. Bedrock is exposed in river and stream valleys. In general, sediment thickness varies by landscape position. Large exposures of bedrock occur in the steep ravines. These exposures are primarily Ordovician dolomite, limestone, and sandstone with Cambrian sandstone, shale, and dolomite exposed along the valley walls of the Mississippi River (Morey 1981, Sims et al. 1966). Devonian dolomite and limestone are more locally exposed along the western edge of the subsection.

Loess thickness is variable; loess deposits range from 30 feet thick on broad ridgetops, to less than a foot on valley walls. The predominant soils are Udalfs, with localized Aquents along the floodplains of major rivers (Cummins and Grigal 1981). Cambrian siltstones, sandstones, and shales influence soil properties.

There are no lakes in this subsection. The drainage network is well developed and dendritic in nature. Major rivers include the Mississippi (which forms the eastern boundary), Root, Whitewater, Zumbro, and Canon. There are numerous coldwater trout streams throughout the subsection. 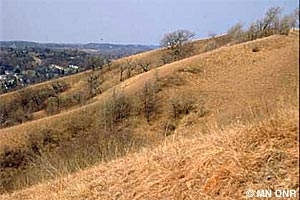 About 30% of this subsection is cropped, 20% is in pasture, and 50% is in woodland (Dept. of Soil Science, Univ. of Minnesota 1973). In Minnesota, Wheeler et al. (1985) found species characteristic of oak openings and barrens to be abundant (based on herbarium collections) although most remaining areas of openings and barrens are small. People are finding good recreational opportunities in this subsection.

Fire was important in upland prairie and oak-dominated communities. Recent records of tornados and ice storms indicate that they locally impacted forest vegetation.

Species in Greatest Conservation need for the Blufflands Subsection