The west boundary consists of a series of Des Moines lobe end moraines (Bemis Moraine). The eastern boundary with The Blufflands subsection is an area of transition between a level to rolling plateau and dissected landscapes. Another gradient is the depth of wind-blown silts (loess). Which grades from thinner deposits in this subsection to much thicker deposits in The Blufflands Subsection. The northern boundary coincides with the northern extent of loess deposits. There is also small outwash plain marking the northern boundary.

This subsection consists of level to gently rolling older till plains.Topography is controlled by underlying glacial till along the western edge of the subsection, where loess is several feet thick. As glacial drift thins to the east, topography is largely bedrock controlled (Dept. of Soil Science, Univ. of Minnesota 1973). Sinkholes are common in the southwestern portion of the subsection.

Depth of drift over bedrock varies from 100 to 200 feet in the west to 10 to 100 feet in the east. Bedrock exposures are common. In general, sediment thickness varies by landscape position. Large exposures of bedrock occur in the steep ravines. These exposures are primarily Ordovician dolomite, limestone, and sandstone, with Cambrian sandstone, shale, and dolomite exposed along the valley walls of the Mississippi River (Morey 1981, Sims et al. 1966). Devonian dolomite and limestone are more locally exposed along the western edge of the subsection.

Loess thickness is variable; loess deposits range from 30 feet thick on broad ridgetops, to less than a foot on valley walls. The predominant soils are Udalfs, with localized Aquents along the floodplains of major rivers (Cummins and Grigal 1981). Cambrian siltstones, sandstones, and shales influence soil properties.

There are few lakes in this subsection. The drainage network is well developed and dendritic in nature. Major rivers include the headwaters of the Root, Whitewater, Zumbro, and Canon. Several coldwater trout streams are present in the eastern part of this subsection. 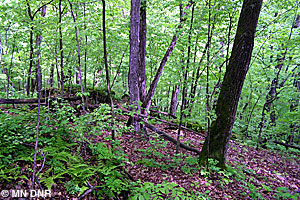 Species in Greatest Conservation need for the Rochester Plateau Subsection