The Alexandria Moraine Complex forms the western and southern boundary of this subsection. The eastern boundary was delineated based on general landform boundaries and the separation of lands dominated in the past by northern hardwoods from lands dominated by conifer or aspen-birch forest.

There are 100 to 500 feet of glacial drift covering most of the bedrock in this subsection. The thickest drift is in the northwestern half (Olsen and Mossler 1982). Middle Precambrian granitic bedrock is locally exposed in the southeast, along the Crow River (Morey 1976, 1981). Bedrock underlying the subsection is diverse. Cretaceous shale, sandstone, and clay and Lower Precambrian granite, meta-sedimentary and metaigneous gneiss, schist, and migmatite underlie the southern half (Morey 1976). To the north are metasedimentary rocks, iron formation, enschist, and metavolcanic rocks (Albert 1993).

The Alexandria Moraine forms a high ridge that is the headwaters region of many rivers and streams flowing east and west. The drainage network is young and undeveloped throughout this subsection. Major rivers include the Chippewa, the Long Prairie, the Sauk, and the Crow Wing rivers. The Mississippi River forms a portion of the east boundary. The Continental Divide splits this subsection. North of the divide, water eventually flows into Hudson Bay. South of the divide, water flows into the Mississippi River system. The subsection has numerous lakes, with over 400 lakes greater than 160 acres in size. The majority of these are present on end moraines and pitted outwash plains. 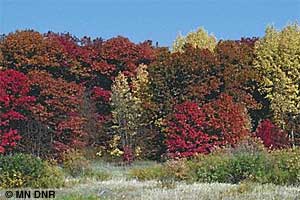 Irregular topography and presence of numerous lakes and wetlands provided a partial barrier to fire, resulting in woodland or forest rather than prairie vegetation. A mosaic of tallgrass prairie, aspen-oak land, and oak openings or savanna was present along the prairie boundary to the west (Marschner 1974). Mixed forests of oaks, sugar maple, basswood, and other hardwoods were present in fire protected sites farther east. Tallgrass prairie grew on more level terrain within the subsection.

Agriculture is the major land use. Wetlands and lakes in poorly-drained potholes provide opportunities for recreation or wildlife habitat. Some upland forests remain, adjacent to lakes or on steep landscapes. Tourism is important, especially in areas around lakes.

Species in Greatest Conservation need for the Hardwood Hills Subsection