This subsection coincides with a large block of deciduous forest present at the time of Euro-American settlement. West of the subsection, tallgrass prairie was the primary vegetation, suggesting basic differences in climate, topography, and natural disturbance. East of the subsection, savanna and tallgrass prairie communities reflect differences in topography and fire regimes, as well as parent material. To the north, the Mississippi River and a fairly extensive outwash and lake plain defines the boundary.

Topography characteristically is gently to moderately rolling across this subsection. Soils are formed in thick deposits of gray limey glacial till left by the Des Moines lobe. Northern red oak, sugar maple, basswood, and American elm were most common in this dominantly forested region. Presently, most of the region is farmed.

The primary landform is a loamy mantled end moraine associated with the Des Moines lobe of the Late Wisconsin glaciation. Parts of the moraine have ice disintegration features. The dominant landscape feature is circular, level topped hills bounded by smooth side slopes. Broad level areas between the hills are interspersed with closed depressions containing lakes and peat bogs. Drainage is often controlled by the lake levels (Dept. of Soil Science, Univ. of Minn., 1973).

Depth to bedrock varies from 100 to 400 feet (Olsen and Mossler 1982). Underlying bedrock includes Ordovician and Cambrian sandstone, shale, and dolomite to the south and Cretaceous shale, sandstone, and clay to the north (Morey 1976).

The soils are dominantly loamy, with textures ranging from loam to clay loam (Dept. of Soil Science, Univ. of Minn., 1973). Parent material is calcareous glacial till of Des Moines Lobe (Late Wisconsin glaciation) origin. They are classified primarily as Alfisols (soils developed under forests). There are some Mollisols (soils developed under grassland) on the west side of the subsection.

The Minnesota River runs through the middle of this subsection. The Mississippi River forms part of the eastern boundary. The other major river is the Crow River and its associated forks. The subsection has an undeveloped drainage network, due to landform characteristics. Lakes are common. There are over 100 lakes greater than 160 acres in size. Many of these are groundwater controlled with no inlets or outlets. 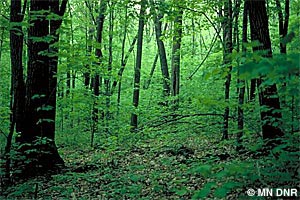 Oak woodland and maple-basswood forest were the most common vegetation types on the irregular ridges of this subsection. Based on his study of the Public Land Survey notes, Grimm (1984) found the order of dominance in the sugar maple-basswood forest was elm (27%), basswood (14%), sugar maple (12%), bur oak (10%), ironwood, northern red oak, and aspen (7%). He also found that along the western margin of the subsection, aspen was most common (53%), followed by bur oak (22%); on other margins, oak woodlands was present , dominated by a mix of aspen, red oak, bur oak, and to the east, white oak.

Although fire occurred within the subsection, it was much less common than on prairies to the west. This is primarily due to irregular topography and presence of lakes. Windthrow was probably also an important natural disturbance, but no references were encountered in the literature (Albert 1993).

Species in Greatest Conservation need for the Big Woods Subsection