This subsection consists of a flat, sandy lake plain and terraces along the Mississippi River. Recent mapping suggests that much of the sand plain, once thought to be fluvial, is probably lacustrine in origin (Lehr, in progress). Low moraines are locally exposed above the outwash and there are small dune features (Wright 1972). There are also ice block depressions and southwest trending tunnel valleys on the sand plain (Albert 1993).

The major landform is a broad sandy lake plain, which contains small dunes, kettle lakes, and tunnel valleys. Topography is level to gently rolling. There are small inclusions of ground moraine and end moraine (Wright 1972). The other important landform is a series of sandy terraces associated with historic levels of the Mississippi River. Terraces are also associated with major tributaries of the Mississippi.

Bedrock is locally exposed in the St. Cloud area. Surface glacial deposits are usually less than 200 feet thick (Olsen and Mossler 1982). The subsection is underlain by Cambrian and Ordovician dolomite, sandstone, and shale (Morey 1976).

Soils are derived primarily from fine the sands of the sandy plain. Most of these sandy soils are droughty, upland soils (Psamments), but there are organic soils (Hemists) in the ice block depressions and tunnel valleys, and poorly drained prairie soils (Aquolls) along the Mississippi River (Cummins and Grigal 1981). Seventy to eighty% of the soils are excessively well drained sands and another 20% are very poorly drained (Dept. of Soil Science, Univ. of Minnesota 1980b).

Terraces associated with the Mississippi River form part of the western boundary of the subsection. Most rivers and streams are tributaries of the Mississippi, although some flow east to the St. Croix River, which eventually flows into the Mississippi. Many rivers, streams, and lakes are located in old glacial tunnel valleys. There are 38 lakes larger than 160 acres in area; about 3% of the subsection's surface is covered by water. Peatlands occupy linear depressions of many tunnel valleys (Albert 1993). 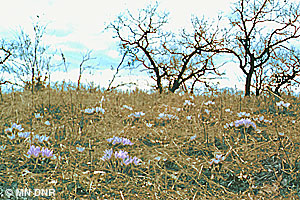 The predominant vegetation on the droughty uplands was oak barrens and openings. Characteristic trees included small and misformed bur oak and northern pin oak (Kratz and Jensen 1983). Jack pine was present locally along the northern edge of the subsection. Brushland characterized large areas of the sandplain. Upland prairie formed a narrow band along the Mississippi River, as did areas of floodplain forest (Marschner 1974).

Sod and vegetable crops are extensively grown on drained peat and muck areas (Dept. of Soil Science, Univ. of Minnesota 1980). Urban development is rapidly expanding into the subsection. Wheeler et al. (1985) found species associated with oak openings and oak barrens to be abundant in the sandplain although large areas of opening and barrens are uncommon.

Fire and drought were important factors impacting the vegetation of the sand plain. Drought was found to cause mortality for two of the dominant species of the oak barrens and savannas, northern pin oak and bur oak. During severe periods of drought, vegetation cover was greatly reduced on portions of the sand plain, resulting in eolian erosion and sand dune movement (Keen and Shane 1990).