The northern boundary of this subsection consists of a Superior Lobe end moraine complex (St. Croix Moraine). To the west, terraces associated with the Mississippi River separate the subsection from the Anoka Sand Plain subsection. The southern boundary coincides with the southern edge of the Rosemount Outwash Plain.

This subsection is small and continues into Wisconsin. Although it is topographically low in comparison to other areas in the state, the subsection is dominated by a large moraine and areas of outwash plain. The subsection encompasses part of the seven county metropolitan area and as a result is affected by urban development.

This subsection is dominated by a Superior lobe end moraine complex. South of this moraine is a series of outwash plains associated with the Superior lobe. There are some areas of Ioess plain over bedrock or till in the southeastern portion of the subsection. Topography is rolling to hummocky on the moraine (steep, short complex slopes) and level to rolling on the outwash.

Glacial drift is generally less than 100 feet thick within the subsection, with maximum thickness of about 200 feet (Olsen and Mossler 1982). Ordovician and Devonian dolomite (some limestone, sandstone, and shale) is locally exposed, especially in the dissected stream valleys at the eastern edge of the subsection (Morey 1976, Olsen and Mossler 1982). Precambrian bedrock is exposed along the St. Croix River.

Soils in this subsection are primarily Alfisols (soils formed under forested vegetation). Areas of Mollisols (soils formed under prairie vegetation) are present on the outwash plains. Parent materials are mixed on the moraines (mixtures of clay loams, loams, sandy loams, and loamy sands). The outwash plains have sandy parent materials (Cummins and Grigal 1981).

The drainage network is poorly developed throughout most of the subsection. This is due to the nature of the landforms. The Mississippi River cuts through the center of the subsection. There is a well developed flood plain associated with the Mississippi. The end moraines in the northern third have an undeveloped drainage network. The St. Croix River forms the east boundary (as well as the boundary between Minnesota and Wisconsin). The river flows into the Mississippi southeast of the Twin Cities. There are many lakes in this subsection. Most are present on the moraines. 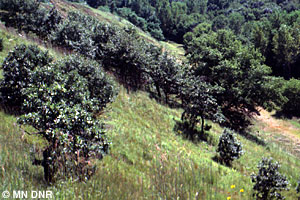 A mosaic of vegetation occurred in the subsection. Oak and aspen savanna were the primary communities, but areas of tallgrass prairie and maple-basswood forest were common. Tallgrass prairie was concentrated on level to gently rolling portions of the landscape. Bur oak savanna developed on rolling moraine ridges at the western edge of the subsection and in dissected ravines at the eastern edge. Maple-basswood forest was restricted to the portions of the landscape with the greatest fire protection, either in steep, dissected ravines or where stream orientation reduced fire frequency or severity (Albert 1993).

Urban development is the primary land use. There are small areas of forest present in the eastern portion of the subsection, although these are becoming scarce as urban development continues. There is significant recreational activity along the Mississippi and St. Croix river corridors.

Fire is the most important disturbance within the subsection. Tornados and high wind events also created significant disturbances. Periodic flooding occurs in river and stream valleys.

Species in Greatest Conservation need for the St. Paul-Baldwin Plains and Moraines Subsection