This subsection is part of a low, level lake plain (Glacial Lake Agassiz) occupied by extensive forested peatlands to the east and tallgrass prairie to the west. Low dunes, beach ridges, and wet swales mark the western edge of the subsection. They provided a barrier that reduced fire frequency and intensity, resulting in increased dominance by quaking aspen, balsam poplar, and shrubs. To the east, low ridges of water-reworked till are surrounded by herbaceous wetlands (Albert 1993). The Aspen Parklands Subsection in Minnesota is the southern end of the parkland landscape, which is more extensive to the north and west in the Canadian provinces of Manitoba, Saskatchewan, and Alberta.

This subsection is part of an extensive glacial lake plain (Glacial Lake Agassiz). It consists of two regions, a lacustrine plain to the west and a water reworked till plain on the east. Portions of the lacustrine lake plain are level, but there are also small dunes and a series of low beach ridges and swales. The beach ridges are commonly gravelly and swales often contain abundant cobbles and boulders (Cummins and Grigal,1981). The water-worked till plain has low relief due to wave action of Glacial Lake Agassiz. Topography is level to gently rolling.

Soils of the lacustrine plain range from loams and silts to sands and gravels. Calcareous fens and saline seeps occur at the base of sand dunes and beach ridges. These soils are classified as Entisols (Psamments and Aquents), Histosols (Hemists), and Mollisols (Aquolls) (Soil Conservation Service 1967, Cummins and Grigal 1981). On the water-worked till plain, soils are generally loamy. The till often contains large boulders that restrict land use (Cummins and Grigal 1981). In places, till is partially mantled with lacustrine sands, silts, and clays.

Total annual precipitation is 20 to 22 inches. 40% of this comes during the growing season. Only 11 to 14 percent of the annual precipitation falls from November through February (estimated from Midwestern Climate Center 1992). This low amount of snowfall in combination with extreme cold and desiccating winds, cause increased spring fires and severe stress on most shrub and tree species. As a result, open woodland vegetation was most common (Albert 1993). The growing season length is about 120 days.

This subsection drains to the north and west. The major river is the Roseau River, which flows through the northern quarter of the subsection and into Canada. The drainage network is undeveloped. Rivers and streams commonly meander extensively. Flooding can be a problem due to level topography. Lakes are rare. 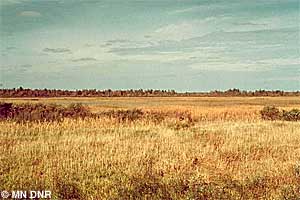 Agriculture is the dominant land use in the southern half of the subsection. In the north, extensive areas have been cleared recently for farming. Remnants of presettlement vegetation are more common and in larger blocks than many other subsections where agriculture is important.

Fire was the most common natural disturbance before settlement. Fire suppression has allowed woodlands to develop from what was previously oak openings or brush prairies (Wheeler et al. 1992). Other causes of disturbance are tornados and floods.

Species in Greatest Conservation need for the Aspen Parklands Subsection