The western boundary of this subsection is the Red River of the north. The eastern boundary follows the eastern limits of continuous tall grass prairie vegetation at the time of Euro-American settlement. Portions of a till plain (Fergus Falls Till Plain [Dept. of Soil Science, 1969 and 1980a]) are included. The southern boundary lies at the southern end of the till plain and the Glacial Lake Agassiz basin.

The majority of this subsection is a glacial lake plain with silty, sandy, and clayey lacustrine deposits. It is level, uniform, and featureless, broken only by wetlands, meandering waterways, and old beach ridges. Drainage is to the north via the Red River and its tributaries.

The major landform is a large lake plain (Glacial Lake Agassiz). Minor landforms include a till plain, beach ridges, sand dunes, and water-reworked till. The greatest depth of lake laid sediments is present along the Red River, which forms the west boundary. Lacustrine origin sediments thin to the east, where glacial till was leveled and reworked with little deposit of lacustrine sediments. Topography is level to gently rolling. There is some steeper topography along drainages and adjacent to Lake Traverse.

Throughout the subsection there are 200-400 feet of glacial drift overlying bedrock (Olsen and Mossler 1982). Glacial drift is underlain by Precambrian bedrock in the east. The western part is underlain by Cretaceous, Ordovician, and Jurassic sedimentary bedrock (Morey et al. 1982). There are bedrock exposures along the shores of Lake Traverse in the southwest. These are sedimentary bedrock and contain many fossils.

Poorly, somewhat poorly, and moderately well-drained lacustrine clays, silts, and sands make up the majority of soils in this subsection. They are primarily Mollisols; Cummins and Grigal (1981) map most of these soils as Aquolls (wet Mollisols). Borolls (cold, dry Mollisols) are also common. Virtually all of the poorly drained soils have been ditched and drained for agricultural use. Saline soils are present in localized areas. Dry, sandy and gravelly soils are characteristic of the beach ridges present throughout the subsection.

Total precipitation ranges from 21 inches in the northwest to 23 inches in the east, with roughly 40% occurring during the growing season. The growing season ranges from 111 to 136 days and is longest in the south. The climate of the subsection is influenced by Pacific Maritime, Gulf, and Polar air masses; the polar air mass has more regular impact upon this subsection than does the Gulf air mass (Critchfield 1974).

This subsection is drained by the Red River, which forms the west boundary. The Red River flows north into Canada. The drainage network is minimally developed. Rivers and streams meander extensively. Flooding is common in early spring and can cause major problems due to level topography. Frozen conditions to the north can cause water to back up and flood large areas. There are few lakes present. Lakes are most common on a till plain in the southeast and characteristically, are shallow and perched. 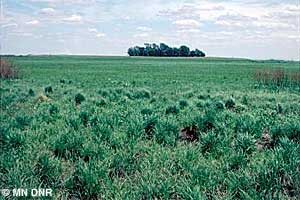 Tallgrass prairie and wet prairie were the dominant vegetation before settlement (Marschner, 1974). The upland prairie was dominated by bluestems, Indian grass, and several other grasses. Wet prairie was dominated by bluejoint grass, cordgrass, cattails, rushes, and sedges. Narrow, forested floodplains were common along larger streams and rivers. Broader zones of woodland or brushland were common in "fire shadows" along streams; size and configuration depended on prevailing wind and stream alignment (Robert Dana, personal communication).

The most important land use is agriculture. The lake plain has been intensively ditched for agriculture. Native flora persists in fragments (in some of moderate size) east of the beach ridges and in the interbeach zone (Albert 1993).