The boundaries of this subsection coincide with large till plains flanking the Minnesota River. The unit is bounded to the southwest by the Prairie Coteau. A series of end moraines define the eastern boundary, starting with the Alexandria Moraine to the northeast and ending with end moraines associated with the Des Moines lobe in the southeast.

This subsection consists of a gently rolling ground moraine about 60 miles wide (Hobbs and Goebel, 1982). The Minnesota River occupies a broad valley that splits the subsection in half. The valley was created by Glacial River Warren, which drained Glacial Lake Agassiz. (Matsch and Wright 1967).

Loamy ground moraine (till plain) is the dominant landform, but end moraines, and lake plains also occupy a significant area (Hobbs and Goebel 1982). Ground moraine topography is level to gently rolling. The steepest topography of the subsection is along the Minnesota River and on the Big Stone Moraine, which has steep kames and broad slopes.

Most of this subsection is covered by 100 to 400 feet of glacial drift (0lsen and Mossler 1982). Cretaceous shales, sandstones, and clays are the most common kinds of bedrock. Ordovician dolomite underlies the extreme southeastern edge (Morey 1976). There is a major area of exposed granite bedrock scoured by Glacial River Warren near Ortonville (Wheeler et al. 1992)

Well- to moderately well-drained loamy soils formed in gray calcareous till of Des Moines lobe origin are dominant. Some soils are clayey and sandy and gravelly soils are present locally, but these account for only a small percentage of soils in the subsection (Dept. of Soil Science, Univ. of Minnesota 1969, 1979, 1981). Cummins and Grigal (1981) show most of the subsection as Udolls and Aquolls on relatively level topography, generally with 15 feet or less of local relief. Dry prairie soils (primarily Ustolls) are also present on level to gently rolling topography. They occupy convex knobs on the landscape.

This subsection is drained by the Minnesota River. Most smaller rivers and streams eventually empty into the Minnesota or the Upper Iowa river. The drainage network is poorly developed due to landscape characteristics. The subsection has 150 lakes greater than 160 acres in size (Dept. of Soil Science, Univ. of Minnesota 1969, 1979, 1981a). However, many of these are shallow perched lakes. Wetlands were very common before settlement. Most have been drained for cropland. 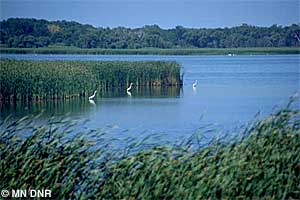 The presettlement vegetation was primarily tallgrass prairie, with many islands of wet prairie (Kratz and Jensen 1983, Marschner, 1974). Forests of silver maple, elm, cottonwood, and willow grew on floodplains along the Minnesota River and other streams. Portions of the Big Stone Moraine supported dry and dry-mesic prairie (Wheeler et al. 1992). There were also dry gravel prairies on kames (Albert 1993).

Agriculture is the dominant land use. This subsection is the heart of the Minnesota Cornbelt (Wright 1972). Wheeler et al. (1992) found upland prairie species to be common throughout most of the subsection (based on herbarium records). Remnant stands of tallgrass prairie are rare.

Fire was the most common natural disturbance before settlement. Fire suppression has allowed woodlands to develop from what were originally oak openings or brush prairies (Wheeler et al. 1992). Other causes of disturbance are floods and tornados.