The southwestern boundary of this subsection occurs in an area of transition from shallow deposits of wind blown silt (loess) over glacial till to deeper deposits of loess. The northeastern boundary is marked by a steep escarpment which becomes less pronounces to the south.

This subsection is part of a high glacial landform occupying Southwestern Minnesota, Southeastern South Dakota, and Northwestern Iowa. It is topped by Buffalo Ridge (1995 feet above sea level) in northern Pipestone County. The high elevation is caused by thick deposits of pre-Wisconsin age glacial till (up to 800 feet thick). There are two distinct parts to the subsection, the middle Coteau, and the outer Coteau.

There are two distinct landforms in this subsection. The middle Coteau is a landscape of rolling moraine ridges of late-Wisconsin drift mantled with loess 1 to 3 feet thick. The outer Coteau, a series of terminal and end moraines separated by ground moraines, ranges from gently undulating to steeply rolling and hilly. A steep escarpment marks the northeast edge of the subsection. The escarpment is cut by several streams, which occupy narrow, straight ravines (Albert 1993).This escarpment fades to the southeast and becomes indistinct on the Iowa border.

Bedrock is covered by up to 600 to 800 feet of glacial till through most of the subsection.

Loamy well-drained soils with thick dark surface horizons are dominant (primarily Mollisols - Aquolls and Udolls with some Borolls and Ustolls). Cummins and Grigal (1981) map both dry prairie and moist prairie soils, with most of the dry prairie soils occurring on dissected or eroded topography. Moister prairie soils occur on rolling end moraines with variable local relief (the outer Coteau).

Much of this subsection drains northeast into the Minnesota River system or southeast into Iowa (via the Des Moines River). The middle portion of the subsection has few lakes and a moderately developed dendritic drainage network. This is due in large part to the easily eroded overlying loess parent material. The drainage network is poorly developed in the outer Coteau, which consists mainly of glacial till. This portion has more wetlands and a greater number of lakes than the middle Coteau. 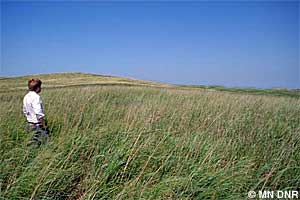 Tallgrass prairie covered virtually all of the subsection. Wet prairies covered a much smaller proportion of the landscape than in the Minnesota River Prairie subsection and was restricted to narrow stream margins. Forest was similarly restricted to ravines along a few streams, such as the Redwood River.

Agriculture is the most important land use in this subsection. There are few remnants of presettlement vegetation left.

Fire and drought were the dominant causes of natural disturbance. Fires were very common before settlement, and were important in maintaining the prairie plant communities. Tornadic events associated with thunderstorms are also common.

Species in Greatest Conservation need for the Coteau Moraines Subsection