The boundaries of this subsection coincide with the highest portion of the coteau complex in Minnesota. The northern boundary (with the Coteau Moraines subsection) is a transition between areas of thick loess deposits and thinner deposits over glacial till.

This subsection is part of a high glacial landform occupying southwestern Minnesota, southeastern South Dakota and northwestern Iowa. It is topped by Buffalo Ridge (1995 feet above sea level) in northern Pipestone County. The high elevation is caused by thick deposits of pre-Wisconsin age glacial till (up to 800 feet thick).

Bedrock is covered by up to 800 feet of glacial till through most of the subsection. There are exposures of bedrock in Rock and Pipestone counties including massive outcrop of red Upper Precambrian quartzite (Wright 1972, Morey 1976, Olsen and Mossler 1982).

Loamy well-drained soils with thick dark surface horizons are dominant (primarily Mollisols - Aquolls and Udolls with some Borolls and Ustolls). Cummins and Grigal (1981) map both dry prairie and moist prairie soils, with most of the dry prairie soils occurring on dissected or eroded topography.

Annual precipitation ranges from 24 inches in the west to 27 inches in the east 11 to 12 inches falls during the growing season. The average growing season length is 145-150 days (Albert 1993). Windy conditions are very common. In fact, energy companies are developing wind generator farms on Buffalo Ridge due to constant, high prevailing winds. These desiccating winds contribute to the prevalence of prairie vegetation in this unit.

Virtually all of this subsection drains southwest into the Missouri River system. A small part drains northeast down the Coteau escarpment and eventually into the Minnesota River. There are few lakes and a well established, dendritic drainage network. This is due in large part to the easily eroded overlying loess parent material. 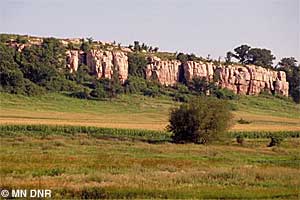 Tallgrass prairie covered almost all of the subsection. Wet prairies covered a much smaller proportion of the landscape than in the Minnesota River Prairie Subsection and was restricted to narrow stream margins. Forest was similarly restricted to ravines along a few streams, such as the Rock and Redwood rivers. Prairies were drier in this subsection than elsewhere in Minnesota, accounting for a prevalence of prairie plants characteristic of midgrass prairies to the west (Albert 1993). Dry prairies were especially common in Pipestone and Rock counties, where soils are shallow over bedrock (Becker, 1986).

Agriculture is the most important land use in this subsection. There are few remnants of presettlement vegetation left.

Fire and drought were the dominant causes of natural disturbance. Fires were very common before settlement, re-energizing the prairie plant communities. Tornadic events associated with thunderstorms are also common.

Species in Greatest Conservation need for the Inner Coteau Subsection