Also known as sheepshead, the freshwater drum is known for the rumbling and grunting sounds the males make to attract mates. It is a large, round-profiled, silver humpbacked fish.

The freshwater drum is a rounded fish with a small tail and a silvery cast to its scales. Its mouth is located toward bottom of its face. It's the only freshwater fish on which the lateral line, a sense organ used to detect motion in the water, runs right through tail.

Freshwater drum have particularly large otoliths, stonelike objects found in the ear of many animals. The otoliths help the drum to sense when it is oriented vertically in water too cloudy to see clearly. These otoliths, which can be more than one inch in diameter, have been used by humans for currency, jewelry, and good luck charms. 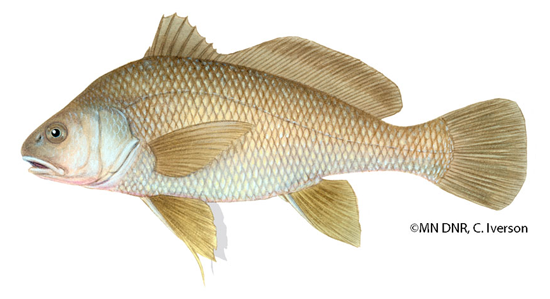