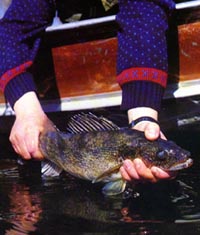 Live-bait rigs hook fish more deeply than artificial lures and thus kill more fish - whether badly hooked fish are put on a stringer or thrown back into the lake. So, the conventional wisdom holds that live bait must be banned if regulations require anglers to release many of their fish.

The 1985-86 study compared the hooking mortality caused by crankbaits and leeches, two popular walleye rigs. None of the walleye caught on crankbaits later died. The hooking mortality for leeches was about 10 percent - significant, but still low enough that anglers could release fish with fair confidence that they would survive. (Interestingly, the study also showed that crankbaits caught larger fish.)

Also important to the survival of fish is how they are landed and handled. If you intend to release a fish, don't play it to exhaustion, do not hold it by the eyes, cut the line if the fish is deeply hooked, and return the fish to the water immediately. In fact, it is often possible to unhook a fish without ever lifting it from the water.

By keeping less than their limit and releasing some fish - especially large fish - anglers perpetuate the quality of their own fishing and that of other anglers. Catch-and-release fishing - whether voluntary or required by special regulations - will probably pay an ever-larger role in fish management.