How well I remember the four Buffalo pump tanks. They were tall and round, held approximately five gallons of water and had the carrying handle more than twenty-six inches from the bottom. They definitely had not been designed to be carried where there was brush. A man six feet or more in height could carry a filled one reasonably well. Some could carry two. When I carried one, I had to lean sideways to keep the bottom from dragging. It was a great improvement when the GMC (Grover M. Conzet) style pump tank came into use a couple of years later. But the Forest Service of those older years never threw anything away, so the Buffalo tank continued in use long after all districts were well supplied with the new style. 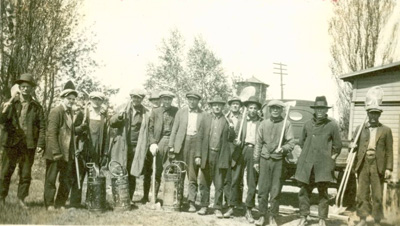 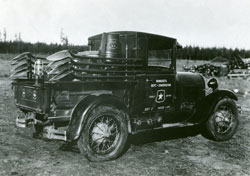 Besides the pump tanks, there were six short handle shovels, a heavy road rake, two round bottom galvanized fire fighting pails and a half dozen burlap bags. The pails had been purposely manufactured with the rounded bottoms so they could not be used for other purposes. Designed in this manner they could only be set down where there was a small depression in the ground. If there was no natural depression, we were instructed to make one by digging out a shovel full of soil. Can you visualize anyone holding a full pail of water in one hand while attempting to dig a hole with the other?

That spring, while working on one of my fires, I carried two pails of water to some men to use in filling Buffalo tanks. I set one of the pails in what I thought was a suitable depression. Because of the grass I did not see the stick lying crosswise in the depression. The pail upset and the valuable water I had carried a quarter of a mile was spilled. With the side of a double-bit axe blade, I flattened the bottom of the pail so it could be put down anywhere. In the years that followed I saw many pails with flattened bottoms so knew there had been others who had dealt with the problem in the same manner.