Explore the history of forestry in Minnesota

Click on thumbnails of photos below to see larger images and descriptions. 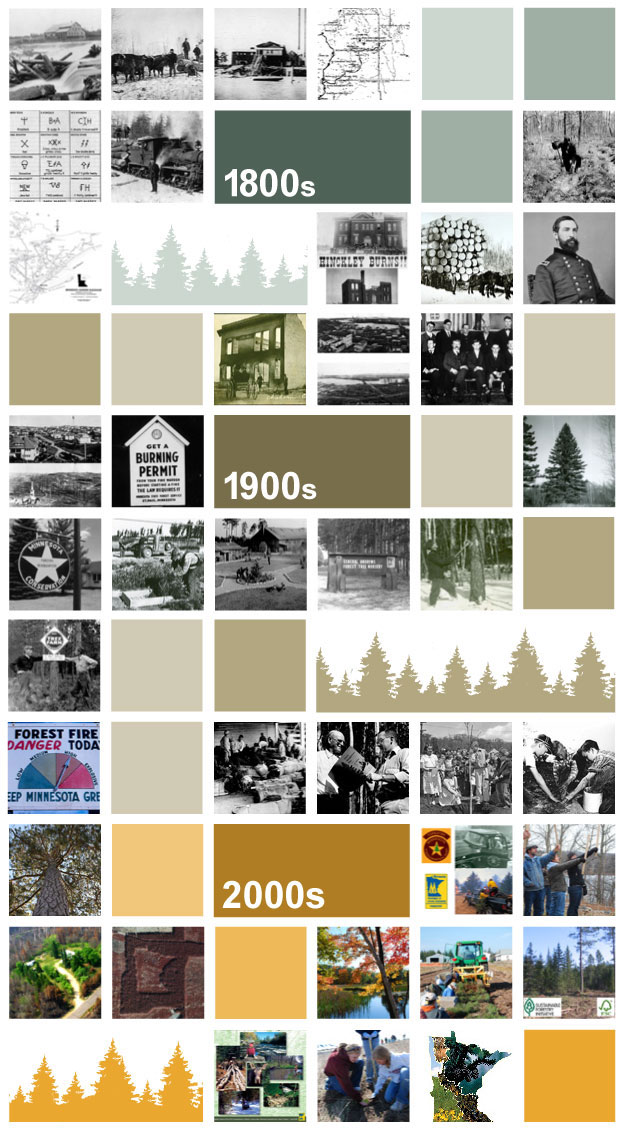 Minnesota's first logging camp was at the junction of the Snake and St. Croix rivers when John Boyce carried on logging with 11 men and 6 oxen.

The first commercial mill was built to saw white pine lumber at Marine on St. Croix, and it continued to operate for three-quarters of a century.

When the second commercial sawmill was erected at Stillwater, Minnesota's lumbering boom began.

The legislature passed a law requiring that all log marks must be recorded before the logs bearing them could be moved.

The first law pertaining in any way to forestry in Minnesota was passed. It provided for paying a bounty to plant trees on the prairies.

On September 1 in the slash-strewn cutover region of Pine County, a group of small, unattended fires were swept into a roaring inferno which destroyed the town of Hinckley and killed 418 people.

Minnesota's lumber industry reaches its peak. The average annual cut of pine was 2.3 billion board feet.

Wildfires burn the city of Chisholm and 20,000 acres of land. No lives were lost.

Wildfires burn more than 300,000 acres of land near the towns of Baudette and Spooner, killing 42 people.

The legislature passes Burning Permit Laws to regulate the best season and weather-related conditions to permit open fires in certain portions of the state.

Department of Conservation is created to unite conservation efforts. The Minnesota Forest Service becomes the Division of Forestry.

The Badoura State Forest Nursery is established when the legislature authorized the state to produce tree planting stock, limited to native coniferous trees for planting on only state-owned lands.

Minnesota's first minimum cutting regulation is established to regulate the size of cut trees and to provide for leaving trees that can naturally reseed logged areas.

The Division of Forestry is authorized to produce planting stock of all species for use on private lands, causing tree production to skyrocket.

The first laws were enacted to allow the Division of Forestry to serve and advise private forest landowners about how to manage, select and market timber, and protect forests.

The legislature mandates that tax-forfeited land may be designated as a School Forest to encourage educators to use nature as an outdoor classroom.

The last Friday in April is designated as Arbor Day.

The legislature passes the Forest Management Act, which requires the Division of Forestry to reforest an amount of state land equal to the amount harvested each year.

Minnesota's Sustainable Forest Resource Act is passed to ensure that all Minnesotans can enjoy our forest resources while balancing environmental and economic considerations.

Minnesota adopts Firewise, a national program to help communities reduce the risk of loss due to wildfires.

4.9 million acres of DNR state forestlands get certified under the Forest Stewardship Council (FSC) and the Sustainable Forests Initiative (SFI). Minnesota becomes the largest FSC certificate holder in the U.S. and among top ten in the world.

The one-billionth tree seedling is harvested from the state nurseries.

Minnesota Forests for the Future Program was established by the legislature to identify and protect private working forests for their timber, economic, recreation, and habitat values using conservation easements, fee title, and other tools.

Each year more than 15 million seedlings are planted in Minnesota.

Forests cover roughly one-third of Minnesota (33percent or 16.3 million acres). Quaking aspen is the most abundant tree in Minnesota, equal to 3.5 billion trees. Less than 4 percent of the original forests remain untouched.