Township Fire Wardens: How it all began 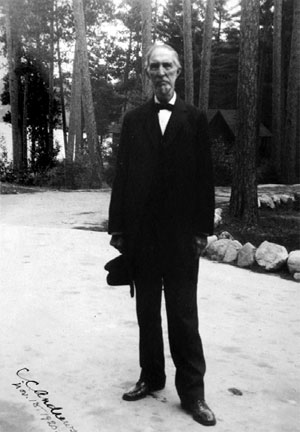 In 1895, the year following the Great Hinckley Fire, General C.C. Andrews strategically crafted a bill that was passed by the Minnesota Legislature that, among other things, created a system of township fire wardens.

Having spent part of his forestry career in Scandinavia, General Andrews had envisioned a state with progressive logging practices, tree regeneration, and the application of scientific forestry. The high-profile logging excesses and the deadly fires of the late 1800s helped garner support when General Andrews introduced a bill (modeled after a New York law) to create a forest commission that would outline policy and enforce laws. Though falling a bit short of what Andrews hoped for, the Legislation passed and set the foundation for an organization that could become the likeness of the Minnesota Forest Service.

To save money, the Legislature assigned the state auditor the duties of the forest commissioner with no increase in salary. The auditor was authorized to appoint a competent deputy who would be titled Chief Fire Warden, receiving an annual salary of $1,200 and having the authority to enforce the law passed "for the preservation of forests of this state and for the prevention and suppression of forest and prairie fires." (Minnesota Statutes, section Laws 1895, Chap. 196)

The law also extended the title of "fire warden" to all town supervisors, city mayors, and village council presidents. That way, local leaders received authority to act upon their own motions to prevent and suppress fires in their respective jurisdictions. Local wardens reported to the Chief Fire Warden in St. Paul. The act provided that each fire warden would get $2 per day, two-thirds of which was paid by the county and one-third by the state. Essentially, the same structure for our township fire warden system that exists today.

No money was provided for permanent employees outside of the Chief Fire Warden. Township fire wardens were paid only when actually fighting fire, which resulted in little to no work done to prevent fires.

When General Andrews was appointed Chief Fire Warden in 1895, his primary duties were to direct the fire wardens, instruct them in their duties, and receive their reports. A force of 1,282 fire wardens was organized the first year. Undoubtedly some ignored their commission and others took their responsibility seriously. Not the most efficient system, but at least it was a beginning.

In 1895, there were numerous forest and prairie fires, but no loss of life. The total cost of administering the new fire prevention law that first year, including the Chief Fire Warden's salary, was $2,020. 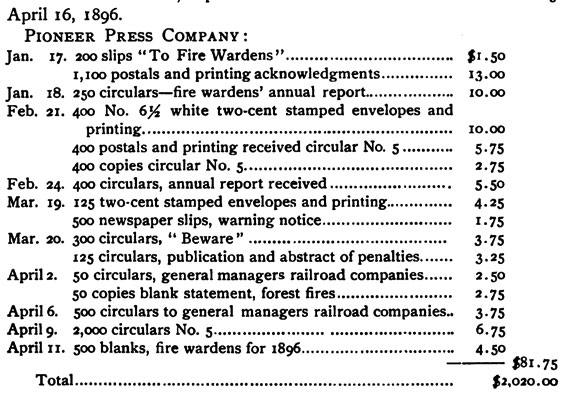 Despite the hundreds dead and millions of acres burned in recent history, many people remained unconcerned about fires in Minnesota's forests and prairies. During the 1897 legislative session, some attempted to repeal the Act of 1895, amid allegations that the office of Chief Fire Warden had been created as a reward for the "brave old general."

The law was not repealed and our fire warden system remains today. General Andrews didn't treat his job as Chief Fire Warden like a retirement perk. Instead, the relentless General became the driving force that created and shaped the Minnesota Forest Service. Today's Division of Forestry is a proud testament to his legacy.