Before we arrived at the Smoky Hills station, (Harold) Page, (Park Rapids district ranger), stopped at a farmhouse near the base of the tower hill and filled an eight gallon cream can with water. He informed me that this would need to last me for awhile.

At the Smoky Hills cabin, Page gave me a large brass key. It must have weighed at least four ounces. He said it would unlock the padlock on the cabin as well as the one on the lookout tower and went on to impress me with its value. It would unlock locks at many Forest Service locations, which made it still more valuable. He told me that if I lost the key there would be a $5.00 charge. That really impressed me. Five dollars represented nearly two days' pay.

We unloaded my groceries and the can of water before Page lifted out a packsack. In it was a telephone (crank type) and three telephone batteries. He asked me if I had ever installed a telephone. We had the same type of a telephone on the farm where I had changed batteries, but that was all I knew about telephones. Between the two of us we got the packsack, which must have weighed fifty pounds, on my back. Page then said that he would tell me what to do after I reached the top of the tower. I began climbing the ladder with a bit of reluctance. I learned later the reason I made that climb alone was that Page never would climb a lookout tower.

The ladder on this lookout tower had a netting of farm hog wire around it for safety purposes. When it was installed there apparently was no thought given to someone climbing the ladder with a filled packsack on his back. There was just room to squeeze through and many times the packsack caught on the wire netting. When this happened, I would need to back down a step to get it unhooked, then try to squeeze closer to the ladder to keep the packsack from catching. However it would eventually catch again and each of these incidents would cause me to clutch the steel ladder still tighter. 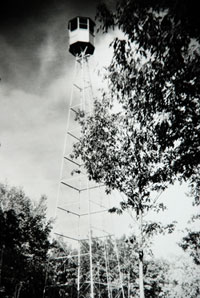 It was a struggle but I made it to the floor of the cab or, as it was referred to in those days, the crows-nest. Now I had to get the key out of my pocket with one hand, unlock the padlock without dropping that valuable key, and still balance the packsack while I held onto the top of the ladder with the other hand. I would not be surprised if my finger prints are still showing on that piece of galvanized iron ladder. The next struggle was to get myself and the packsack through the small trap door. Eventually I made it and opened a window. Page yelled up instructions in stages until the telephone wires were all accounted for and connected. One long ring was the universal ring to alert telephone operators. The ring went through. I got an answer showing that all the wires were connected properly.

With a, "Report all smokes you see to the ranger station at Park Rapids," Page drove away. I could find no instructions as to how to maintain the lookout tower records. Now I was all alone and it was my first opportunity to pull myself together. First I found a string and tied my key firmly to the belt loop of my trousers. Then I located the previous year's tower records so I could determine what I was expected to do. But this still did not fully prepare me for reporting the first smoke that appeared.

Sometime after noon I saw the first evidence of a fire. There was no wind and the faint smoke seemed to be going straight up. I waited to decide if the smoke might be two or twenty miles from the tower. As I watched, it became grayish in color and then black. Eventually I decided it was probably twenty miles away and could be a burning building because of its very dark color.

I reported the smoke in less than two minutes after I first saw it and tried to sound professional. When asked how far it was from the tower, I hesitated a few seconds even though I had already decided it was between fifteen and twenty miles away. I thought the hesitation might indicate that I was carefully considering the answer.

After a half hour I became convinced that it was not a burning building. There was more smoke and it was quite widely spread at the base. I called Park Rapids to report my observation and was told that fire fighters had been dispatched and the location of the fire was known. Days later I learned my estimate of distance had been wrong by some five miles. In less than an hour the volume of smoke had diminished showing that the fire, the only smoke I saw that day, had been brought under control.

It was after five o'clock when someone called me from Park Rapids. Since no smoke was visible I was told I could leave the tower for the day. I was really grateful for this since I had not had a thing to eat since breakfast. Page had said nothing about going down for lunch so I stayed right there. After that I took a sandwich and fruit jar of water with me.