Two dominant forces combined to make Pillsbury State Forest what it is today. The first force occurred thousands of years ago — glacial manipulation; the second is a force of singular, human determination. To understand "The Pillsbury," one must understand both of these seminal forces.

The Pillsbury, Minnesota's first state forest, came into official status in 1935. However, its foundation was set in place millennia before that date. It really began with the Wisconsin glacial event that occurred between 16,000 and 20,000 years ago.

Its features include short, steep hills, small deep ponds and lakes (known as ice block lakes), and a wide variety of till sizes ranging from a tiny grain of clay to boulders the size of automobiles. This till is what you see when you ride, drive, or hike through the Pillsbury, and it left a perfect foundation upon which a future forest would begin. The combination of particle sizes and slope allowed good drainage but adequate moisture retention, and a rich, fertile soil produced a forest of high quality red and white pine.

Before the American Civil War, a young, energetic New Hampshire man moved to what would later become Minneapolis. John S. Pillsbury came to Minnesota looking for new business ventures and a new place to practice his entrepreneurial skills. In 1855, Pillsbury began building a successful and diverse legacy in Minnesota by constructing a hardware and lumber business, establishing the world's largest flour milling company, amassing ownership of thousands of acres of forest land in north-central and northeast Minnesota, and serving three terms as Minnesota's eighth governor.

Pillsbury also developed a love of philanthropy. He gave generously, and often anonymously, to many civic and educational entities, particularly to the University of Minnesota. Before his death in 1901, Pillsbury gave Minnesota State Forestry Board 990 acres of cutover pineland in southern Cass County. This "forest reserve" became the nucleus upon which the Pillsbury State Forest was built. 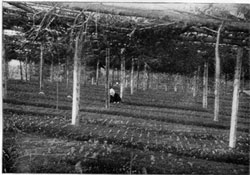 The Pillsbury Reserve nursery, showing Norway spruce seedlings sown in 1904 and covered by a brush "shade." Photo taken in October 1904.

By the spring of 1904, the first seeds had been planted in Minnesota's first state forest nursery. This nursery, no longer in operation, can still be seen in the northern reaches of the Pillsbury.

The summer of 1910 brought serious drought and devastating forest fires to much of Minnesota. In 1911, in response to the dangerous conditions, the Minnesota Forest Service was formed to suppress and prevent forest fires. One of the strategies was to build fire lookout towers. The first tower in northwest Minnesota was the Martin Hope tower, a wooden structure built just north and west of the Pillsbury nursery. Lars Hope worked at the nursery and owned land just across Rush Brook from the nursery. Hisson Martin designed the tower. Lars donated the land and Martin constructed the tower for $36.30. It was later replaced by a steel tower, and in 1937 was again replaced with a steel stair tower adjacent to Gull Lake.

Since 1900, the forest has grown in both size and structure. In a 1971 Brainerd Daily Dispatch article, the land base was listed as nearly 7,900 acres. Today the Pillsbury State Forest encompasses 25,612 acres of state, Cass County, and private holdings. Timber includes red oak, aspen, birch, red, white, and jack pine. More than 1 million tree seedlings have been planted in the Pillsbury. By 1971 it had produced enough timber to build more than 3,000 homes. 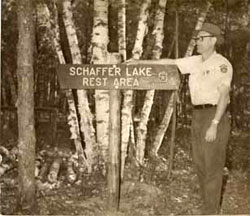 Walter Stark at one of his many recreational developments.

Enter the second dominant force that shaped the Pillsbury: Walter E. Stark. Walter was born in Nebraska, but his family moved to Milaca, Minnesota when he was a year old. Years later, Walter would spend time in the Civilian Conservation Corps and the U.S. Army during World War II before being hired by the Minnesota Department of Conservation in 1945.

Walter described himself as "a hard-nosed Swede." Lean and strong, Walt always wore a fedora-style hat atop his white, crew cut hair, along with a pair of black, horn-rimmed glasses.

Walter's introduction to the Pillsbury forest came in 1952, when he was assigned to the Pillager Ranger Station. The forest's condition on his arrival did not meet with his high expectations. Enacting positive change was slow going as Walter struggled to assert himself as the Ranger, rather than simply as a ranger. Walter pinpointed two needs in the Pillsbury: first, to protect the forest from fire, and secondly to provide opportunity for the wise, recreational use of the forest. The first need required a straightforward approach, while the second proved a bit more complex.

There had been a long history of fire in the Pillsbury. Many of the long-time residents felt the need to burn the brush to keep it from growing too tall and thick. Walter didn't see this need in the forest. With the first report of fire, Walter would empty the ranger station of every piece of firefighting equipment, imploring to his rangers: "Stomp on 'er, boys. Hit it on the head and nip it in the bud!"

Walt was not only an aggressive firefighter, but a painstaking fire investigator. On one occasion, Walt was sure that he knew who had started a fire, and subsequently spent several hours looking for the cause. He finally found a half-burned farmer match, took it to the suspect and held it up in front of his face, saying, "Here's the match you started the fire with. If you do it again, you'll go to court and pay a fine." In many cases, Walt was even able to turn individual and public sentiment in his favor. He was tough on fires and fire starters, and it paid long-term dividends for the Pillsbury.

The second aspect of Walt's vision for the Pillsbury was to provide a variety of recreational opportunities. Money for such projects was often difficult and sometimes impossible to find during the 1950s through 1970s, but that didn't matter to Walt. He had a dump truck and dozer, and developed the practice of neighboring rangers "trading time" with each other on projects. Walter had the ideas, the equipment, and the labor; Pillsbury had the potential. It was the perfect combination.

One of the first projects was the establishment of Rock Lake Campground and Day-Use Area. He carved what is now a campground with 48 camping sites, a swimming beach, boat access, and a picnic area on the west side of Rock Lake. There were no lengthy environmental reviews, project proposals to scrutinize, or permissions to seek. Walter saw the need and the potential, and simply went out and did the work.

In the early 1960s, horse riding enthusiasts Les and Ray Sellnow, met with Walt to see if a horse riding trail could be developed in the Pillsbury. Walt felt that the Pillsbury would be an ideal place to attract more visitors to a gem of a forest. With the Sellnow brothers' expertise, Walt and the Sellnows located, cleared, aligned, and widened trails as needed to take advantage of the best riding opportunities. Over time, Walt developed an assembly area, horse camp, and the Schaffer Lake rest area. In the winter, Walt groomed the horse trails for snowmobile use.

Today, the Pillsbury State Forest has 27 miles of horse riding trails. As of 2011, the original Sellnow brothers and their friends have attained 50 consecutive years of horse camping in the Pillsbury. The first horse endurance race in the Midwest was established on the Pillsbury horse trail.

In 1982, both the Pillsbury and Walter were honored at the dedication of the Walter E. Stark Assembly Area. Officiating the event were fellow horseback riding enthusiasts and Minnesota governor Al Quie. The event celebrated Pillsbury's recreational opportunities and the culmination of one man's vision. For anyone who has spent an evening around a campfire at the horse camping site, without a doubt has heard stories of Walt Stark, and how, with the determination of a glacier, he completed the work in the Pillsbury that the ice sheets began thousands of years ago. 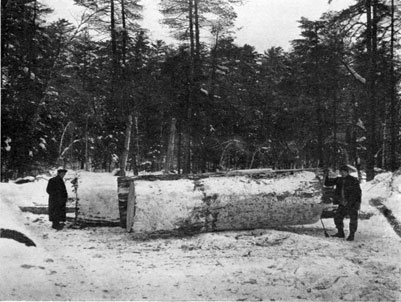 This white pine was cut in Cass County within the Minnesota National Forest in December 1906. It was 425 years old and had a 6-foot diameter at the stump. The tree yielded 6,300 board feet of lumber and was the largest white pine ever recorded in Minnesota. Photo furnished by G.E. Marshall, US Forest Service