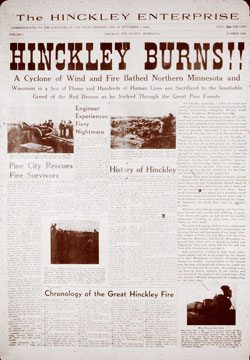 In early May 2007, just after ice-out in northeastern Minnesota, a fire leapt to life. Before it was over, more than 75,000 acres had burned in two countries. As big as that number is, it pales in comparison to another fire — the Great Hinckley Fire of 1894, which burned a phenomenal 350,000 acres or more than 400 squares miles. Unfortunately, that is not the worst of it. The fire also took the lives of at least 418 men, women, and children. Countless pets, livestock, and wildlife were also lost.

From 1891 to 1894, the St. Paul Weather Bureau documented a steady loss of soil moisture in central Minnesota. This loss continued throughout the summer of 1894. Barely 2 inches of rain fell between May of that year and September 1, the day that made history. Fires had been burning all summer, not uncommon at the time. A haze had been present throughout those hot days as far south as St. Paul, with the smell of smoke everywhere. What was worse for townsfolk though, was the unending dust that was stirred up with every footfall.

September 1 was just another Saturday, filled with domestic and farm chores, unless a fellow was employed at the Brennan Lumber Company, by far the largest employer in town. The company site spread out across 36 acres. Huge sawdust piles were ubiquitous, as was the 28 million board feet of cut and stacked lumber. In addition, logs soon to enter the mill were piled high too, for 200,000 board feet of lumber was cut in an average day.

A portion of the Brennan Lumber Company in its heyday.

By noon the wind had picked up. It was so strong that Duluth pedestrians were assaulted by ashes and cinders and the air felt like furnace blasts. By late afternoon, it was dark enough that lights were turned on across the city. Duluth was more than 70 miles from the fire front. An inversion was present, the hot air trapped by cooler air above it. Between the temperature climbing to 90 degrees, strong winds, lack of humidity, and the inversion, the perfect storm had been created. The converging fire first destroyed the towns of Mission Creek and Brook Park before hitting Hinckley. Upon arrival, the fire was a solid wall to the south, east, and west.

"Two fires managed to join together to make one large fire with flames that licked through the inversion finding the cool air above. That air came rushing down into the fires to create a vortex or tornado of flames which then began to move quickly and grew larger and larger turning into a fierce firestorm," as stated by the Hinckley Museum. Flames reached heights of 200 feet. Flaming debris was sent thousands of feet into the air due to the convection column. Fire whirls moved ahead of the main fire, touching down randomly and exploding into new fires. Horizontal vortices rolled forward with such speed that horses were unable to outrun it. Even the trains had difficulty staying ahead of the fire. Once the Brennan mill caught on fire, all hope was lost. According to the New York Times, "not only was every green and living thing licked up by the flames, but the soil itself was blackened and consumed, and the earth torn up in great holes and patches." Temperatures at the core of the fire were over 1,600 degree Fahrenheit, hot enough to melt barrels of nails and fuse railcar wheels to the tracks. 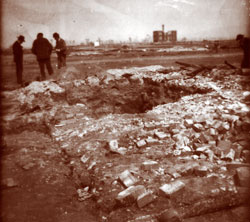 All that remained of a building in Hinckley.

People survived any way they could. Some climbed into wells, many suffocating due to lack of oxygen, but a lucky few survived. Some endured the fire in the middle of potato fields, while 300 others hunkered down in 18 inches of water and mud in Skunk Lake, beating out flames that caught on clothing. Many took refuge in the gravel pit, an eyesore and bone of contention in Hinckley, until that fateful day. Human and property losses were staggering. The Brennan mill alone suffered $600,000 in losses with the total between $3 million and $5 million, not counting the huge loss of the timber resource. It was not until May 1898 that the last victim of the fire was discovered. The death toll was probably much higher than the official estimate provided in the fire's aftermath. The outpouring of compassion for the survivors was unparalleled, with contributions arriving from all corners of the country. The fire also precipitated the hiring of the first chief fire warden in Minnesota, General C.C. Andrews. 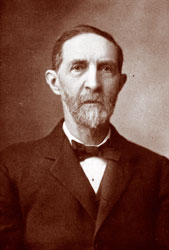