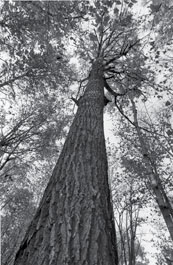 As immigration to the United States increased, the demand for building materials made a parallel ascent. The resulting chain of events started in the state of Maine, with the discovery of white pine's versatility. This species was lightweight so it floated well, much better than its "cousin," the red pine. It was a "soft" wood so it was easy to saw, both on the stump and again at the sawmills. Even with these attributes, white pine was still strong, durable, and had some resistance to rot.

The taste and demand for white pine was insatiable with the ever-expanding populations in cities such as Chicago and St Louis, in addition to all the settlements popping up in the newer territories, Minnesota included. It wasn't long before the federal government began to purchase land from the American Indians so in turn, lumbermen could buy the land from the government. Once land was in the hands of the lumbermen, logging camps spawned. 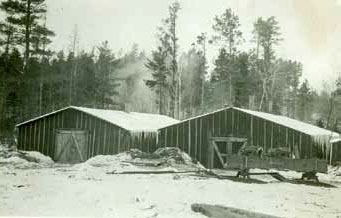 Camps were rather crude at first, consisting of two buildings, one for the men and one for the oxen. It was debatable who had the better accommodations as the men's quarters were referred to as a "hovel." As logging increased, camps got larger, housing 100 men or more. Additional buildings were needed. One to two bunkhouses, a cookhouse, an outhouse, and most important, a barn for the real workers of the camp—the horses and oxen—were constructed out of logs with tarpaper roofs. The average camp also had a blacksmith shop, a filer shack, and sometimes an office/store, where men could purchase essentials. These items could be charged against their account, which was paid, minus expenses, at the end of the harvest season.

The earliest camps, located along major tributaries so the winter's logs could be floated to sawmills once the spring thaw took place, subsisted on game and fish as the main source of their provisions. Camp owners supplied beans, peas, flour, sugar, and salt. This, in itself, was a major contribution, for the average logger required 5 pounds of food each day to maintain his stamina. 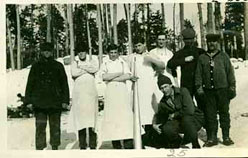 The loggers, often called lumberjacks, would return to the same camps or follow a favored cook to another camp each winter. A cook could make or break a camp. If a cook was unpopular and lumberjacks were unhappy with the food, they would find work elsewhere or not show up at all.

In the early years, timber harvesting not only provided logs for clamoring sawmills, but harvesting the white pine also provided settlers with the opportunity to move into the Minnesota territory. Because timber was cut but not replenished, more wildlife species began to appear. White-tailed deer and ruffed grouse populations grew as the number of cutovers increased. 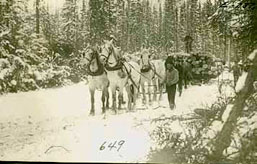 Oxen were the preferred "workers" in the camps at first, especially those camps closer to a river. Although slow moving, oxen were powerful, moved through the understory of brush easily, consumed less food than horses, and required less care and attention. In addition, if an ox went lame, it could always provide the lumberjacks with a new variety of meat. Most often, oxen were used on the southern edges of the pine range, while horses were favored farther north as they could better handle the swamps and longer drives to a water source.

Lumberjacks worked six days a week, from sunrise to sunset, regardless of the weather conditions. The men knew how to dress and wool was the cloth of choice. The men avoided cotton whenever possible, wearing wool socks, long underwear, pants, hats, coats, and hand coverings. Most never knew the air temperature, and preferred the cold to the warming days of spring, because wet wool did not dry well in the bunkhouse overnight. A January thaw was definitely not a welcome respite from winter.

By the 1890s, more than 20,000 men were lumberjacks, with that same number employed by sawmills. This correlated to the peak years of logging, which began a downward descent after 1910. To supply the millions of board feet of lumber demanded by the general public, these men needed 10,000 horses to skid the log loads to railway spurs or landings adjacent to tributaries deemed accessible and capable of floating logs downstream. 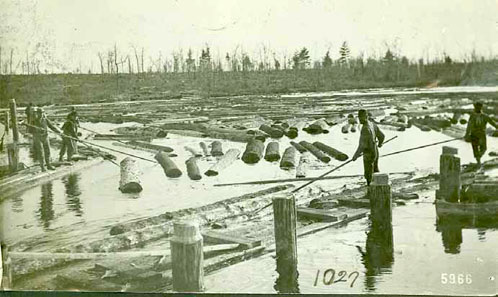 As winter gave way to spring, most men abandoned camp and went back to farming and families, but some stayed on to guide logs downriver. This was brutal and very dangerous work if the rivers ran swift. Men would grease their legs up to the waistline with lard as protection against the icy rivers, but being wet and cold was the norm. A man could easily be killed if he fell from a log and was caught beneath a floating wooden mass. Injuries were common and went with the job. Logging was and still remains, a dangerous occupation, but the camp owners and cooks did all they could to prevent epidemics such as small pox and typhoid, by maintaining high standards of cleanliness. Cuts and other minor wounds were often doctored with balsam pitch or a pinch of chewed tobacco.

By 1910, the biggest logging camps were beginning to be dismantled, but it would be another 30 to 40 years before logging camps, mostly staffed by piece cutters who were paid by the log, dwindled and closed down completely.