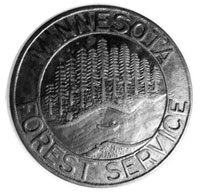 On April 1, 1928, I was informed of my first promotion in the Minnesota Forest Service. As of that date I was a forest patrolman and was to be assigned to the Longville patrol district. My salary was to be $90.00 a month and I was given the official badge. As with the (tower) key, the penalty for losing the badge had been set at $5.00. The round nickel-plated badge was a little over an inch in diameter. The words, "Minnesota Forest Service," were printed around a scene depicting a forest of trees, a river, and a canoe.

A forest patrolman was expected to have an automobile capable of transporting the necessary fire suppression tools as well as a fire fighter or two. The reimbursement rate for the automobile was set at 3 1/2 cents a mile. It would be necessary for me to purchase a car.

I had often dreamed of my first car but had felt that there would need to be three requirements. Seldom were there cases when a parent or someone else purchased a car for a young person. It was felt that a young person should first be of legal age. Then he should have a need for a car and earn the money to purchase one. I now felt that I had fulfilled all those requirements. 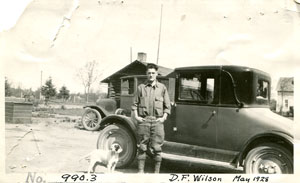 Almost every young person has visions of what his first car would be like. What fulfilled my dream was a 1927 Chevrolet coupe. Since we were only a year or two past the time when all cars were black, I was really taken with the fact that it was a robin's egg blue and with black fenders. The normal wooden spoke wheels had been replaced with steel disc wheels (also blue) which gave it a really sporty appearance. It had all the latest equipment including demountable tire rims. The trunk was large enough to carry the few shovels, axes and the Buffalo pump tanks I would need in my district. I paid a total of $375.00 for my dream car.