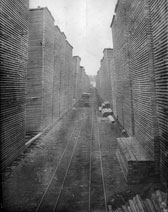 The relentless march west through the United States in search of white pine continued until the timber barons arrived in Minnesota to grab the last vestiges of this high-in-demand species. By 1875 logging was big business, due to the abundance of trees, expanding rail system, and network of waterways extending all the way to the Gulf of Mexico. The rails provided a secondary means to transport logs and lumber elsewhere in Minnesota as well as to the southern states, where demand was especially high. The appetite for white pine was insatiable, particularly in St Louis. 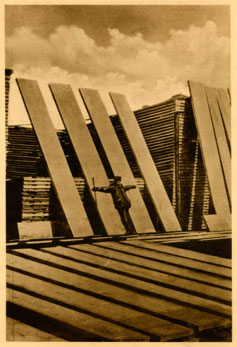 Minneapolis, Stillwater, and towns along the St. Croix River became beehives of logging activity due to the close proximity of white pine to navigable waterways and newly constructed railways. In just one week in 1875, one railroad company shipped 141 railcars of lumber through Stillwater to points south. In three short years, another railroad company more than doubled its shipment of lumber from 25 million feet to 54 million feet, while log rafts on the Mississippi River annually exceeded 89 million feet.

While the volume of harvesting continued to increase each year, the supply was never able to catch up to the incessant demand, both within Minnesota and elsewhere. By 1890 loggers employed more than 20,000 men who worked from sunrise to sunset, felling and limbing trees with an ax. Before the end of the century, Minneapolis was the leading lumber market in the world. Even though its sister city, St Paul, also was in the lumbering business, its volume paled in comparison.

By 1900 Minnesota produced 2.3 billion feet of lumber, of which 2.1 billion was listed as white pine. That same year, three of the four largest mills in the United States were located in Minnesota, of which two were in Minneapolis. In addition, 11 other Minnesota mills processed more than 100 million feet annually. This pace could not and did not last. After a hard winter in 1901-02, the state was not able to regain its momentum in lumbering, and production began to fall, albeit slowly at first. 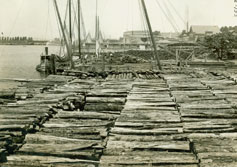 While trees were becoming scarcer near Minneapolis, Duluth could still find and cut a substantial volume, but it too peaked before 1905. With demand for white pine still rampant, Duluth grew rapidly. Its population increased by 80 percent in five years, which was the highest increase anywhere in Minnesota. With the increase came a big local demand for lumber. That meant more sawmills, more workers, and more demand for homes, schools, businesses, and lumber.

Duluth's growth also created more demand for ships, elevators, and docks to move lumber, wheat, and iron ore. By the time the additional elevators were built, 100 million feet of lumber had been consumed. With this new network, even more employees were needed because each piece of lumber was loaded onto ships by hand. 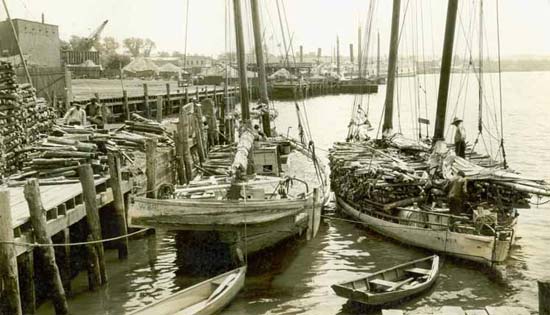 While profitable, all this lumber had a darker side. A tremendous amount of money was generated through the sale and harvest of trees. Of course, everyone wanted at least a small piece of this huge "pie," and few barriers stood in their way. Many of the stumpage laws were ignored and it was not uncommon for buyers to determine not only the timber volume on a tract they planned to purchase, but also the supposed species found there. Sometimes a purchaser would buy the stumpage and pay the bond, but not cut the timber. After the sale expired, the same person would then repurchase the same tract at a lower price. This was easy to do because the state auditor rarely checked prior sales records. There were also unscrupulous state employees, scalers, and companies. One scaler was known to estimate a tract to have 357,000 feet, but the true volume was 7 million feet. 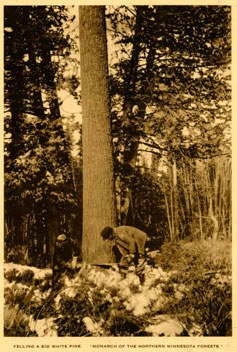 Good things were happening as well. As the demand for white pine increased, the process of turning standing timber into lumber improved. In 1890 a "hot pond," or an enclosed area of water on a river was warmed by introducing hot water that created steam to thaw logs, enabled mills to cut lumber year round. Mills switched from circular saws to band saws. The operation was not faster, but the smaller groove created during cutting decreased waste substantially.

Sawmills were also realizing that accidents in the mills had a huge impact on employee morale. This spurred the installation of protective measures. Injury and death rates decreased, but this industry was still the most dangerous business in the state. Around the same time, companies began to carry compensation for its employees in the event of injury, unheard of elsewhere in the country.

Still, mills could do nothing about the diminishing resource. After the turn of the century, more and more mills began closing down. By 1929 the world's largest white pine mill, located in Virginia, sawed its last tree, ending an era of logging that would never again be duplicated in Minnesota.