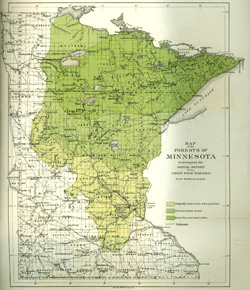 In 1849, after many agreements and treaties with the American Indian nations, the land that was to become Minnesota, was claimed as a territory. Of the 51.7 million acres the territory encompassed, 33 million acres were forested. Most of it was untouched by humans until settlers began to drift into the hardwood forest of the southeast in the beginning of the 19th century. The timber was used to build homes, but was also removed so the settlers could raise crops. In spite of Minnesota having an expanse of prairie, a belief was held that these nonforested lands were infertile and inadequate for growing grains. 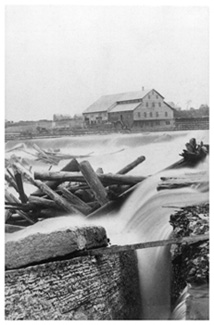 While settlers were busy harvesting hardwoods, in 1821 the United States government built the first sawmill to supply timber to Fort Snelling, which was located at the confluence of the Minnesota and Mississippi rivers. More than 15 years later, the first commercial sawmill was built at Marine-on-St-Croix to saw giant white pine. The mill was built there, rather than on the Mississippi River, because the triangle of land, boxed in by the Mississippi, Rum, and St. Croix rivers contained the only white pine timber covered by treaties with the American Indians. Even though this mill operated for more than 75 years, success was slow because markets were lacking. However, the achievement of rafting logs and lumber on the St. Croix and Mississippi rivers to Iowa and points further south created a boom for the lumber industry.

The largest raft of lumber floated down the Mississippi River consisted of 5.5 million board feet of timber. It took just over three weeks to reach its St. Louis destination in spite of delays for repairs to the two steamers that guided the raft while in transit.

Another mill, built on the falls at St. Anthony, which is now called Minneapolis,had a slow start as well. The mill was idle for the first year because the boom that held all the logs broke free during spring flooding. The logs drifted to Dubuque, Iowa, and further south. No timber could be harvested to replace the lost logs because the timber in the vicinity belonged to the American Indians. The owner of the mill finally negotiated a deal with an astute chief, Hole-in-the-Day, for timber to supply the mill. The chief charged 50 cents for every white pine tree harvested, a large sum of money at the time.

Excerpts reprinted from "A History of Forestry in Minnesota."