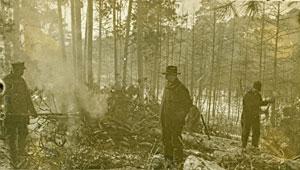 My introduction to slash inspection was to spend a week with Allen Stone, the patrolman-at-large, examining timber cutting operations north of Park Rapids. At each logging operation he would outline, at considerable length, the several factors that needed to be considered in determining a fire hazard. If we concluded that the timber cutting had created a hazard, we discussed how it might be reduced. In some cases the operator was required to put the resulting slash in small, separate compact piles and leave them to rot. In some cases the operator was told to burn the piles when it was safe to do so. On one operation it was decided that the limbs be cut from the remaining tree tops and spread on the ground. There were many instances when we agreed that no disposal be requested since no fire hazard existed. At the end of the week Stone concluded I was sufficiently instructed and would be able to make satisfactory decisions alone.

On the Monday morning following Thanksgiving Day in 1927, I made my first slash inspection trip alone… In my canvas shoulder bag that morning, I carried many things. There was a ham sandwich I had purchased in case of an emergency and an envelope containing the information I would need about those who had complied with the cutting report law. I also carried blank cutting report forms for operators I might find who had not complied with this law. To ensure warm dry feet I carried two extra pair of wool boot socks. Probably the most important items I carried were a compass and the Smoky Hills district field book.

This book would be my guide and I referred to it often. The individual township maps showed the roads as well as many other features. There were lists of settlers by name as well as the designation of state owned lands. There were a variety of symbols associated with maps and settler lists. The most important symbols to me were those that indicated homes where one was most likely to get a meal or to find a place to sleep. There was even a symbol indicating the better places.

I soon learned that the field book information was out-dated so it was necessary to cross out old information and put in new. I was hoping to help the next patrolman be better informed than I was. It had been emphasized that I should spend the nights with rural residents if at all possible. This would provide an opportunity to promote forestry and particularly fire prevention. Without doubt we became closer to the rural people because of this policy. 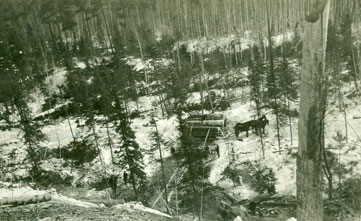 At that time nearly all timber cutting operations were carried on during the winter months using horses and sleighs. Even the roads I would be following for the next three days would be only sleigh roads. These roads were never snow-plowed, and as I started my trip, the snow depth in the woods was about ten inches. Sleighs were of a narrower width than the tracks made by the horse pulling them so the action of the sleighs as they slid from side to side created a smooth path at least a foot wide which made walking really easy.

Each sleigh track entering a wooded area could possibly lead to a timber cutting operation. If considerable use was indicated, I would examine it closely. Generally if forest products had been moved over a snow covered road, bits of tree bark could quite easily be seen. When there was such evidence, I followed the sleigh tracks to learn what had taken place.

Most of the time when I found unreported timber cutting, it was on the individual's own property. Usually they had not heard about the timber cutting report law and readily complied with the law by completing one of the blank forms I carried. It had been impressed upon me that I was making the trip to inform those people of the law and to gain voluntary compliance with it. I was not to threaten or make arrests for noncompliance.

At about 3:30 in the afternoon of the first day I inquired about a possible place to spend the night. The woman of the house said that they did not have an extra bed but was certain I would be able to stay at the Emil Swanson's, who lived down the road about a mile. Emil was a full- time farmer and not engaged in logging. Not only did I stay with the Swanson's that night but left in the morning with the feeling that they were glad I had stopped. Later I put the special symbol in the field book which indicated good food and a good bed.

Before I left the Swanson's, I had some difficulty getting Mrs. Swanson to accept payment for the two meals and the lodging. She finally accepted seventy-five cents. It was a requirement that there be a signed receipt for money expended for lodging even though it was only twenty-five cents. As I went out the door, Mrs. Swanson handed me a small paper sack. When I was out of sight I looked inside. It contained a huge sandwich and a piece of cake. She surely made the outlook for that day's lunch much better.

This sort of hospitality was very typical of the rural residents of that period. Guests were a special delight during the winter months when they had few contacts with people except possibly for close neighbors. Very few people in rural areas even had a radio. There were practically no rural electric lines and battery operated radios were expensive to operate and far from satisfactory.

Each day's work was nearly the same. Walk the roads, talk with loggers, hope for a good place to eat and sleep, and watch for more side roads and timber cutting operations. At each timber operation, I made the necessary recommendations in connection with the logging slash. When possible, I talked to the logger about the disposal requirements. Walking the roads I often met people who always stopped to talk. It was not only because I was a stranger and they were curious, but rather because they were friendly.