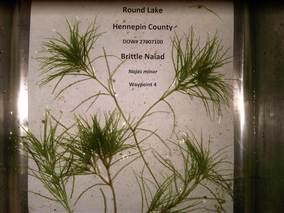 Brittle naiad is a rooted, submersed aquatic plant. It has a bushy appearance and its coloration varies from green to green-brown.

Leaves are thin and stiff with “toothed” or serrated edges and pointed tips. They curve strongly downward and grow one to two inches long. Pairs of leaves are oppositely arranged along the stem at nodes, but can appear to be in whorls (multiple leaves radiating from a single point) near the tip of the plant. Stems are light to dark brown.

Tiny flowers appear in the axil of the plant (the intersection point between stems), with separate male and female flowers on the same plant. Flowers are pollinated by water current.

Seeds are tiny, mature in summer through late fall, and germinate in the spring.

Brittle naiad is an annual plant that spreads primarily by seeds and secondarily by plant fragments. It starts growing early in the season. Although its growth is usually compact and bushy, the highly branched stems can grow up to four feet in length and fragment easily.

Brittle naiad is native to Europe, western Asia and northern Africa. It’s unclear how it was introduced into the United States. It may have been unintentionally introduced into the Great Lakes through the discharge of contaminated cargo ship ballast water. It also may have contaminated commonly cultivated imported plant species. It was first confirmed in Minnesota in 2010, in Round Lake (Hennepin County). Only six lakes in Minnesota are listed as infested with brittle naiad. Refer to the infested waters list for current distribution.

It looks similar to many native, beneficial naiad plant species found in Minnesota lakes and rivers.

Brittle naiad (Najas minor) is a prohibited invasive species in Minnesota, which means it is unlawful (a misdemeanor) to possess, import, purchase, transport or introduce this species except under a permit for disposal, control, research or education.

People spread brittle naiad primarily through the movement of water-related equipment. Plant fragments can get tangled in trailers, motors and inside watercraft (boats, canoes and kayaks). Tiny seeds, which may be hidden in mud and debris, can stick to anchors, ropes, boots, and waders, as well as scuba, fishing, and hunting gear.

Report new occurrences of brittle naiad to the DNR immediately by contacting your DNR Invasive Species Specialist or log in and submit a report through EDDMapS Midwest.

Mechanical control can be done by cutting or pulling the plant by hand or with equipment such as rakes or cutting blades.

Herbicide control can be done using a wide range of aquatic use herbicides, including but not limited to endothall, fluridone, diquat dibromide and flumioxazin.