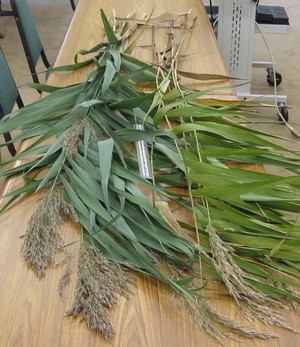 Non-native Phragmites, also known as common reed, is an extremely tall wetland grass. During the growing season it can reach over 15 feet tall, and has dark green leaves with a large purple-brown flower head.

Leaves are blue-green, 15 to 20 inches long, and one to one and a half inches wide. Leaves adhere tightly to the stem throughout the growing season and remain as long as the stalk stays standing. The juncture between the leaf blade and the leaf sheath, the ligule, helps identify non-native Phragmites (less than 1mm for non-natives, greater than 1mm for natives). Non-native stems are rough in texture and lack the round, black fungal spots often found on native Phragmites stems.

Flowers develop in early August at the tip of each stem and form a dense feathery cluster that are typically purple (early development) to golden (late season/winter) in color. The invasive flower head is much more robust than the native variety.

Flowering stalks produce thousands of grayish colored seeds. Seeds are covered in fine silky hairs that give them a fluffy appearance.

Rhizomes (underground stems that send out roots and shoots from their nodes) are white to brown in color and create a root structure that can grow up to 60 feet in length and down to a depth of more than six feet. New stalks can grow off these spreading roots, or from pieces of the rhizome. Single plants can grow into a large stand through rhizome spread, or when pieces of the rhizome, roots, or shoots are moved to a new location.

Non-native Phragmites is a perennial wetland grass found in a variety of wet soil habitats. It can grow over 15 feet tall. It forms dense clonal stands containing both living and dead shoots from previous growing seasons. If cut down, the plant can re-sprout along the stem in many places. It is commonly found in roadside ditches.

Non-native Phragmites originated in the Middle East and is native to Europe and Asia. The species was unintentionally introduced into the United States’ Great Lakes through contaminated solid ballast of cargo ships or with packing material from shipping operations. It was also intentionally introduced in some locations to filter water in wastewater treatment lagoons. It was first discovered in the United States along the east coast between late 1700s and early 1800s. Over the course of the 20th century, it has spread across the entire continent, invading wetlands, lake shores, streambanks and marshy areas. Refer to EDDMapS Midwest for distribution information.

Minnesota is home to a native, beneficial Phragmites species. A combination of characteristics are used together to distinguish between natives and non-natives. Native Phragmites leaves fall off by late fall, and by early winter stems appear glossy and smooth, often with a maroon color that fades over the course of the winter.It can be difficult for non-specialists to conclusively determine the difference between native or non-native Phragmites. When in doubt, verification can be obtained by sending photos to the DNR.

Non-native Phragmites is a Minnesota Department of Agriculture Restricted Noxious Weed in Minnesota. Importation, transportation and sale is prohibited.

People spread non-native Phragmites primarily through the movement of contaminated sediment. Seeds, which can be hidden in mud and debris, can stick to boots, waders, and other fishing and hunting gear. Hunters may unknowingly use it in their blinds. Contaminated soil fill and roadside maintenance equipment can also spread this plant and its seeds.

Report new occurrences of non-native Phragmites to the DNR immediately by contacting your DNR Invasive Species Specialist or log in and submit a report through EDDMapS Midwest.

Mechanical control can be done by mowing three to five times during the growing season to decrease the density. Equipment used to manage phragmites should be cleaned of all debris before removing it from the treatment site to prevent the unintended spread of seeds or rhizomes.

Herbicide control can be done using glyphosate and imazapyr herbicides. Follow-up control by mowing or cutting individual stands after herbicide treatment to remove dead plant material is recommended for additional control. Work done in other states indicates that multiple years of follow-up control are often necessary to prevent reestablishment.