You are not likely to see spongy moth in most parts of Minnesota because there are relatively few of them present. However, once an area is infested, their fuzzy, tan egg masses can be found anytime between August and the following April. Egg masses are about the size of a quarter, and each contains 500-1,000 eggs. Female spongy moths often deposit their eggs in tree bark crevices and under loose bark, but egg masses are commonly found on anything kept outdoors, including firewood, logs, car wheel wells, vehicle bumpers, yard furniture, etc. The eggs hatch between late April in southern Minnesota and early June in northern Minnesota. 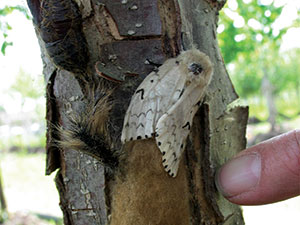 Female spongy moth with egg mass. A shed caterpillar skin and pupa can also be seen. Photo by the Minnesota Department of Agriculture.

After hatching, young caterpillars feed on plant foliage and grow up to 2½ inches long. Caterpillars are covered with hairs, and older larvae develop a characteristic pattern of five pairs of blue dots followed by six pairs of red dots along their backs. Other species much more commonly found in Minnesota, such as forest and eastern tent caterpillars, can look very similar to spongy moth. Caterpillars develop into dark reddish-brown and leathery pupae in mid-summer, often attaching to an object with silk strands.

Spongy moth showing distinctive, characteristic pattern of five pairs of blue dots followed by six pairs of red dots along its back. Photo by the Minnesota Department of Agriculture.

In Minnesota, adult spongy moths begin to emerge in July in the south and August in the north. Male moths are gray-brown and are smaller than the females, with wingspans ranging from ¾ to 1½ inches. Males have feathery antennae used to detect the female pheromone, or sex attractant. The larger female moths are white, flightless, and have wingspans of 1 to 2 inches. Both males and females have dark zigzag bands on their forewings (the upper pair of wings). Adults are active from late summer through early fall. 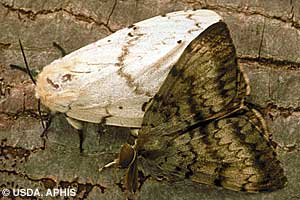