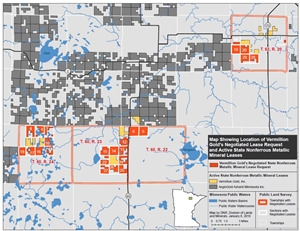 The DNR accepted written public input about the areas under consideration for lease from January 8, 2018 through 4:30 p.m. on February 8, 2018.

Following the review of the public input, the DNR will finalize the areas that it will recommend for lease. The DNR will publish information and maps about these areas on this webpage along with the date, time and place of the State Executive Council meeting at which the leases will be considered.