The badger is a somewhat flat, furry mammal that spends much of its time beneath the ground. It digs through soil to make a home for itself, to find food, and to escape enemies. It is a formidable adversary if cornered, but is not the brawler it is reputed to be. In fact, the badger is often quite tolerant of other animals. It will even share its own den with red fox.

Color: A distinctive white stripe runs from the badger's nose over its head to the nape of its neck. The fur is yellowish-gray, long, very thick, and the skin loose-fitting.

Badgers mate in August or September. After the eggs are fertilized, the embryos develop slightly, then lie dormant for several months. In late winter they begin developing again. The babies--usually three, but as few as one or as many as seven--are born between March and June in a grass-lined den 2 to 6 feet beneath the ground. They have fur but their eyes remain shut for 4 to 6 weeks. The mother takes care of them by herself until they leave the nest in the fall.

The badger feeds primarily on mice, ground squirrels, and gophers. In fact, it is the only predator that can dig out the deep-burrowing pocket gopher. Badgers are also fond of snails, grasshoppers, bird eggs, honey, insect larvae, and snakes.

Not many animals will tackle a badger. Badgers' biggest enemies are people and dogs. 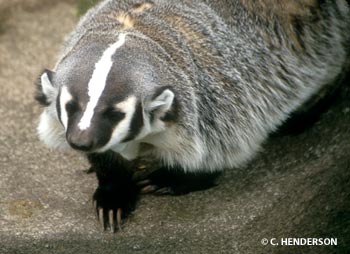 Badgers are found over most of Minnesota except in the heavily forested northeast. They are nocturnal creatures. During cold weather, they keep to their burrows, probably in a state of dormancy. They prefer open prairie, but will also make their homes in farmland. They dig an intricate den system and at the end of a long tunnel build a grass-lined nest.

Some people think badgers got their name because their black-and-white face looks like a badge. They were once killed for their fur, which was used to make coat linings and brushes. Badgers do not hibernate, but they do sleep most of the winter away in their underground burrows.