Most people are not aware of the many different kinds of animals that live under the water of our lakes and streams. Mussels are one of these often overlooked animals. Freshwater mussels inhabit lakes and rivers throughout the world, with North America supporting more species than any other continent. 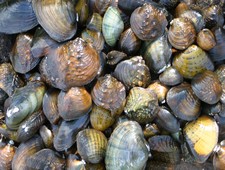 Mussels are members of the second largest group of animals in the world, the Mollusks. Being members of the Phylum Mollusca, mussels are closely related to other bivalves, marine mussels and clams, as well as snails and even octopuses. Freshwater mussels, also called naiads or unionids by scientists, consist of a soft body enclosed by a hard shell made up of two shell halves called valves. Inside the shell a thin tissue called the mantle completely surrounds the soft body. This mantle is also the part of the body that secretes the two valves of the shell. The valves, which are held together by an elastic-like hinge, have the ability to be closed by two strong adductor muscles whenever the animal senses a threat. 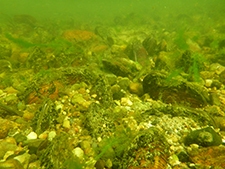 Mussels living in our lakes and rivers filter oxygen and particles from the water, cleansing the water in the process and absorbing what they consume into their bodies and shells. It is for these reasons that mussels, often spending their entire life in a small area of the stream bed, are sensitive to changes in their environment and serve as indicators of the health of our lakes and streams.

Degradation of our lakes and rivers from runoff of silt and chemicals as well as physical changes from damming, channelization, and dredging, have taken their toll on native mussels in North America. As a result, according to conservation groups such as the American Fisheries Society and The Nature Conservancy, mussels are one of North America's most imperiled groups of animals. Of the 302 known species of freshwater mussels recognized in North America, about 65% are considered endangered, threatened, or of special concern. In Minnesota, 28 of our 51 native mussel species are listed as endangered, threatened, or of special concern, 5 species are presumed extirpated (are now extinct from MN), and at least 2 more species are in imminent danger of extirpation. 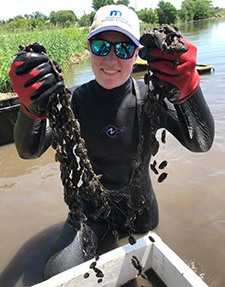 DNR's Center for Aquatic Mollusk Programs (CAMP) is busy re-building populations of threatened and endangered native mussel species. Student intern Emma Ceplecha holds several hundred black sandshell mussels CAMP is growing in Eastside Lake in Austin, for reintroduction into the Cedar River this fall. The mussels were propagated at CAMP's lab in Lake City. Recently the lab "gave birth" to some 14,000 federally endangered baby snuffbox mussels. The snuffbox mussels will continue to grow in the lab over the summer, then they'll be placed in containers to overwinter in the river, eventually to be released in the Mississippi near Hidden Falls Park in St. Paul in 2019. About 10 different threatened and endangered mussel species are being propagated at the CAMP lab. 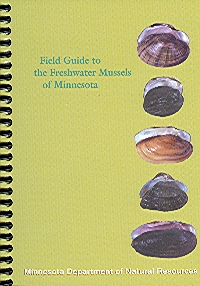 Field Guide to the Freshwater Mussels of Minnesota

A tool for anyone interested in identifying and learning about Minnesota freshwater mussels. Contains photographs, shell descriptions, habitat associations, and distribution maps. Also contains general information about mussels, their importance in the ecosystem, threats to their survival, collection methods and collection regulations.

Currently out of print. A revision is in progress. 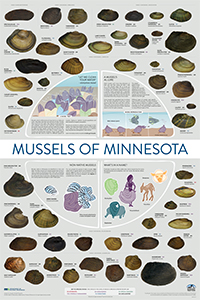